Corporate Rule Is Not Inevitable

Corporate Rule Is Not Inevitable 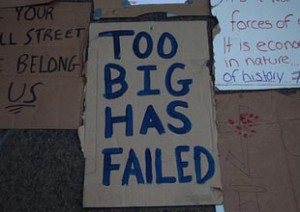 7 signs the corporatocracy is losing its legitimacy … and 7 populist tools to help shut it down.

You may remember that there was a time when apartheid in South Africa seemed unstoppable.

Sure, there were international boycotts of South African businesses, banks, and tourist attractions. There were heroic activists in South Africa, who were going to prison and even dying for freedom. But the conventional wisdom remained that these were principled gestures with little chance of upending the entrenched system of white rule.

“Be patient,” activists were told. “Don’t expect too much against powerful interests with a lot of money invested in the status quo.”

With hindsight, though, apartheid’s fall appears inevitable: the legitimacy of the system had already crumbled. It was harming too many for the benefit of too few. South Africa’s freedom fighters would not be silenced, and the global movement supporting them was likewise tenacious and principled.

In the same way, the legitimacy of rule by giant corporations and Wall Street banks is crumbling. This system of corporate rule also benefits few and harms many, affecting nearly every major issue in public life. Some examples:

It’s not that we, the people, haven’t noticed all this.

Some say corporations have such a strong grip on politicians and big media that it is impossible to challenge them, no matter how many of us there are.

But I believe we can do it. In the past few months, YES! Magazine has been researching ways that ordinary people can challenge corporate power (look for strategies in our spring issue, out in February). And we found that there are actually a lot of tools at our disposal:

None of these actions will be easy. It will take time—potentially years of work—to make big change. But just as the legitimacy of apartheid crumbled well before the institutions of apartheid went down, the legitimacy of corporate rule is crumbling. So I’m convinced that, with you and me and all the others out there creating alternatives and taking a stand, we will see change.

Sarah van Gelder will deliver these comments at Seattle’s rally on the second anniversary of the Citizens United ruling.