Corporate Landlords Are Taking Over L.A.

Corporate Landlords Are Taking Over L.A. Will Politicians Do Anything About it?

A new, must-read report by Strategic Actions for a Just Economy (SAJE) has made one thing eye-poppingly clear: corporate landlords are taking over Los Angeles. With that, SAJE points out, L.A. renters are increasingly dealing with predatory practices — such as sudden evictions and unfair, excessive rents — that turn their lives upside down. The question now is, will Mayor Eric Garcetti and the L.A. City Council do anything about it?

For “Beyond Wall Street Landlords: How Private Equity in the Rental Market Harms Tenants,” SAJE policy analyst Alexander Ferrer exhaustively examined public data and a wealth of academic research. What he found was alarming: more than two-thirds of all Los Angeles rental housing is owned by corporate investment vehicles. That includes secretive limited liability companies, or LLCs, that hide the names of property owners. 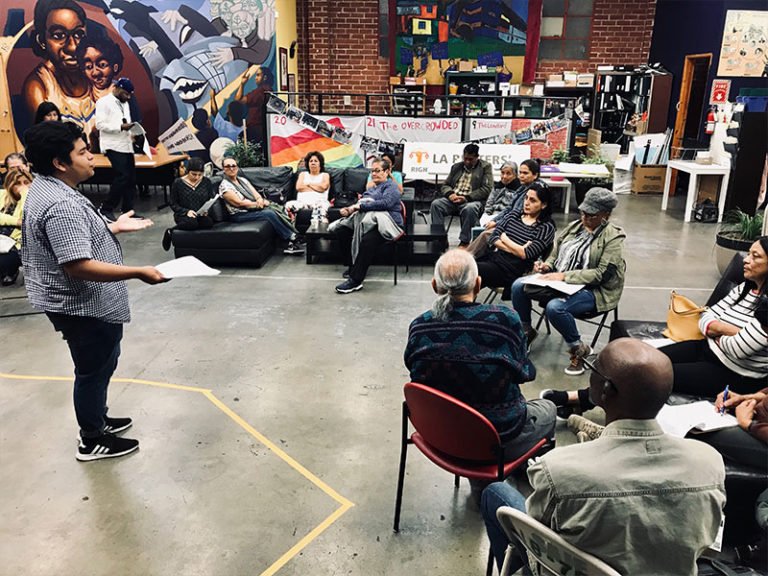 “We found that corporate vehicles own over 43 percent of all rental units in the City of Los Angeles today,” Ferrer writes at Knock LA. “Corporate landlords own, on average, over twelve times as many units as individual owners do, buildings that are over five times larger, and ten years newer on average than individual landlord’s buildings are. Trusts — which are larger than ‘mom-and-pops,’ meaning ownership of more than four units — own 23 percent of all units, and have investment patterns much more akin to corporate landlords than to individuals, owning larger, newer buildings, and having larger portfolios in general.”

It’s a crucial finding — a game changer, in fact.

“On the topic of the mythical ‘mom-and-pop landlord,’” Ferrer writes, “we also found that the vast majority of properties are not owned by ‘mom-and-pops’ (defined by the city of L.A. as any property owner with fewer than five rental units) despite rhetoric to that effect being popular among vocal defenders of landlord interests. In fact, all landlords of this size own only about one-third of rental properties, and individual owners (as opposed to small companies) own less than a quarter. With 75 percent of tenants living in buildings owned by investment vehicles or large landlords, their needs should be the priority over a small class of owners.”

Indeed. To rein in predatory corporate landlords in California, Housing Is A Human Right helped lead Proposition 10, in 2018, and Proposition 21, in 2020, both of which aimed to expand rent control in California. Unsurprisingly, corporate landlords poured tens of millions into the opposition campaigns, rolling out misleading TV ads that confused and tricked voters and successfully defeated both Prop 10 and Prop 21.

Now, in L.A., Housing Is A Human Right is fighting the troubling update of the Hollywood Community Plan, City Hall’s guide for new development in the Hollywood area. Predatory practices in the real estate industry are not only carried out by corporate landlords, but also corporate developers, who build the largest projects in L.A. and routinely evict tenants and carry out other shady methods to construct luxury housing. The ongoing “pay-to-play” scandal at L.A. City Hall is just one example.

So far, the proposed update does not require sizable percentages of lower-income housing in new developments, does not create strong protections against gentrification and displacement, and largely takes away residents’ say in what’s built in their neighborhoods. But the Hollywood Community Plan is filled with giveaways for corporate developers.

Housing Is A Human Right is demanding that the L.A. Planning Department and L.A. City Councilmembers Mitch O’Farrell, Nithya Raman, and Paul Koretz — whose districts lie inside the Hollywood Community Plan area — look out for residents first and foremost. That includes robust tenant protections and a large percentage of lower-income housing in luxury-housing projects.

Housing Is A Human Right and other activists are waiting to see what will be the councilmembers’ next move, which will be telling one way or another. If they ignore activists, O’Farrell, Raman, and Koretz are signaling that they have no problem with corporate landlords’ predatory practices — and, in fact, they’re willing to be accomplices.

The rise of corporate landlords and developers in L.A. spells trouble for middle- and working-class residents. Corporate real estate companies are driven by an insatiable appetite for bigger and bigger profits — no matter the consequences for the public. Mayor Eric Garcetti and the L.A. City Council must rein in the corporations with sensible regulations, but will they? Big Real Estate executives, after all, are among the largest contributors to their campaign coffers.