to a City Near You 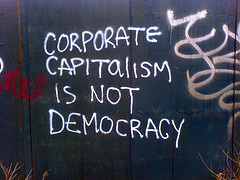 In her book The Shock Doctrine, Naomi Klein demonstrates how wealthy elites often use times of crisis and chaos to impose unpopular policies that restructure economies and political systems to further advance their interests.  She calls these orchestrated raids on the public sphere in the wake of catastrophic events, combined with the treatment of disasters as exciting market opportunities, “disaster capitalism.”

Disaster capitalism is on display around the country, as legislators use the debt crisis afflicting their states as an opportunity to hollow out the public sector.  In Michigan it’s being packaged as “emergency financial management” by Republican Gov. Rick Snyder, who is looking to exploit an economic crisis that has left his state with a severe budget deficit.  In March, Snyder signed a law granting state-appointed emergency financial managers (EFM) the ability to fire local elected officials, break teachers’ and public workers’ contracts, seize and sell assets, and eliminate services, entire cities or school districts, all without any public input.  He claims these dictatorial restructuring powers will keep Michigan communities out of bankruptcy.

Michigan currently has unelected EFM’s in charge of the schools in Detroit, as well as the cities of Pontiac, Ecorse, and Benton Harbor.  In Benton Harbor, the city’s elected mayor and city commissioners were stripped of all power by unelected EFM, Joseph Harris. Harris issued an order saying the city commissioners have no power beyond calling meetings to order, approving minutes, and adjourning meetings.  This decimation of local democracy is spreading.  Robert Bobb, the EFM that has taken over Detroit’s public school system, sent layoff notices to all of the district’s 5,466 unionized employees.  Bobb says he will exercise his power as EFM to unilaterally modify the district’s collective bargaining agreement with the Federation of Teachers starting May 17, 2011.

ACLU of Michigan Executive Director Kary Moss said the law raises concern about separation of powers, its impact on minority communities, collective-bargaining rights and privatization of services.  She is absolutely correct.  Faced with a deficit, emboldened EFMs can sell off public property to developers, close public schools and authorize charter schools, and void union contracts with literally no recourse for local, tax-paying residents or their elected officials to stop it.

And, it gets worse.  Michigan has joined with the Turnaround Management Association (TMA) to develop a training program for prospective emergency managers.   According to their website,  TMA members are a professional community of turnaround and corporate renewal professionals who share a common interest in strengthening the economy through the restoration of corporate value.  Michigan Treasurer Andy Dillon, while speaking about the new program during a seminar on municipal distress, said that mayors and school superintendents are essentially running big businesses that, in many cases, are more complicated than private companies.  It’s no surprise then, that Wall Street investors are thrilled about the potential impacts of the EFM law.

An estimated 400 accountants, lawyers, school employees, and city workers began classes offered by the program in Lansing, Michigan this week on topics including “Dealing with the Unionized Workforce,” navigating municipal bankruptcy and negotiating contracts for sewer, water and other utilities.  ”Dealing with the Unionized Workforce” is code for destroying unions and has nothing to do with balancing the budget.  Gov. Scott Walker (R-WI) in an appearance before the House Oversight Committee, under questioning from Rep. Dennis Kucinich (D-OH), admitted a key provision in his state budget proposal to curb union rights had no fiscal benefit, putting to rest the notion that union-busting governors like Rick Snyder have any intention of actually solving their state’s economic woes.  As for “negotiating contracts for sewer, water, and other utilities”, this is code for privatize, privatize, privatize!

This so-called financial emergency is really a democracy emergency.  Local governments are NOT corporations, nor should they resemble them.  The true purpose of emergency financial management is the conversion of a democratically elected government into a hierarchal business entity through economic “shock therapy”, which would be impossible if workers, elected representatives, and residents had any say.  Michigan has become a laboratory for  Governor Rick Snyder to impose disaster capitalism onto his state.  If we allow what is taking place in Michigan to continue unabated, it won’t be long before disaster capitalism finds its way to a city, town, or school district near you.