Coronavirus, Militarism and the End of an Illusion

Coronavirus, Militarism and the End of an Illusion
Black Alliance For Peace

People are waking people up to the fact that the US state and government does not belong to them but to a capitalist class that is only looking out for itself.

“The ‘sheltering in place’ order is starting to look like a convenient tool for the state to manage the growing frustration, fear and anger.”

“The nation that considers itself to be the apex of capitalist achievement on planet Earth turns out to have no health care system worthy of the name – a testament to the sucking moral vacuum at America’s imperial, white settler colony core. A lowly virus – a form of being that exists at the very border between “life” and “not-life” – has revealed the world’s superpower as butt-naked and very much afraid. (Glen Ford)

Coronavirus and second economic collapse in just ten years should finally put to rest the fairy-tale of U.S. Exceptionalism.

Trump’s “Make America Great” and Obama’s “U.S. Exceptionalism” are slogans that reflect an ongoing commitment to the normalized assumption of white racial and civilizational superiority. The idea that the territory that became the United States, and its settler population, were specially anointed by a god who gave them providence over the land and the Indigenous people is so ingrained in the national imagination that its extension to rationalize and justify U.S. imperialist policies was seamless.

The U.S. over the years shamelessly boasted of its “greatness” and being number one in all things, including having the best healthcare system in the world. And even though Bernie Sanders and healthcare movements in the U.S. consistently revealed the devastating reality of a system that generated billions of dollars for the healthcare industry while simultaneously generating unnecessary deaths, bankruptcies and millions without coverage — the mythology that the U.S. had a workable system remained in place, until now.

The coronavirus has dramatically stripped away the veneer of the for-profit healthcare system to expose a patchworked and completely dysfunctional system held together by state programs and two national programs, Medicare and Medicaid, that are still unable to provide basic coverage to millions of citizens and non-citizens.

“The mythology that the U.S. had a workable system remained in place, until now.”

But it is not just the absence of a public healthcare system that exposes the lie of U.S. exceptionalism. Black Alliance for Peace Coordinating Committee and Black Agenda Report’s Margaret Kimberley writes  that COVID-19 is not just a health emergency but it has exposed the causes of inequality and suffering in the U.S.

And what is the source of inequality and suffering?

Union del Barrio says that coronavirus has “unmasked the sick brutality of capitalism .”

The brutality and criminality of the colonial/capitalist system of state violence is reflected most graphically by the illegal and immoral policy of sanctions imposed on 39 nations by the U.S. and its Western allies. Sara Flounders from the International Action Center exposes the role of Big Pharma  as part of U.S. effort to destroy the capacity of nations to protect their population’s health. She details the inhumane policies being imposed on nations like Venezuela and Iran, that are being denied the ability to import medicinesand medical equipment to counter the COVID-19 pandemic.

BAP is concerned with the troubling signs that the global recession and disruption of the national economy that has resulted from the coronavirus crisis is now seen as a serious security threat by the capitalist oligarchy. The state, with the full support of corporate media, appears to be a conditioning the public to accept draconian restrictions on basic civil liberties and human rights under the guise of the public health emergency.

“Venezuela and Iran are being denied the ability to import medicines.”

Ahjama Umi raises the very important point  that we must resist efforts to panic the public into supporting a growing police state.

It is becoming clear that if the issue is really about containing the spread of the virus, there are effective protocols for combating pandemics. Mark P. Fancher, a member of BAP’s Africa Team, discusses the measures that are in place in Africa,  in nations like Nigeria, for preventing, tracking and containing infection; measures that could have been easily applied to the U.S.

But with the repressive proclivities of the U.S. national security state, it is important that we view critically some of the measures being called for: from the use of the military to national lockdowns.

The “sheltering in place” order is starting to look like a convenient tool for the state to manage the growing frustration, fear and anger as it becomes apparent that the economic and racially stratified healthcare delivery system are unable to protect the lives of the working class.

As the system finds itself immersed in a crisis that is deepening by the day, the propensity for violence and ferocious repression on the part of the U.S. state must be seen as a real threat to the people. BAP will continue to monitor the situation. 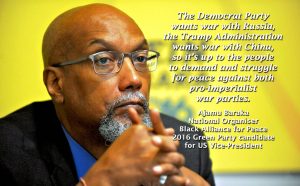 The oppressed should have no illusions.

The conservative pro-business measures offered by the capitalist class to deal with the consequences of COVID-19 are waking people up to the fact that the state and government does not belong to them but to a capitalist class that is only looking out for itself.

That revelation of truth will be the only positive that will emerge from the crisis.

The Black Alliance for Peace  is a people(s)-centered human rights project against war, repression and imperialism.

Or, you can comment by emailing us at comments@blackagendareport.com