Trump Should Reign For 1,000 Years

The Evangelical magazine Christianity Today’s editor rebuked the president in a December op-ed entitled “Trump Should Be Removed From Office.” In the interests of equal time we give the devil his due with an editorial response from a periodical on the other side of the fiery aisle:

In our founding parchments, Lucifer explains that Satanism Tonight Dispatches will help diabolical Satanists interpret one-sided fake news in a manner that reflects their deep, utter lack of faith. The impeachment of Donald Trump is a significant event in the story of our Lake of Fire. It requires ranting and raving. And if anybody knows about witch-hunts, it’s us!

The typical Satanism Tonight Dispatches approach over the millennia is to stir the boiling pot, to encourage all to pursue injustice, and mistreat political opposition as uncharitably as a charity run by Trump, that Scrooge of scourges.

We want STD to be a place that welcomes Satanic worshipers from across the diabolical spectrum, and reminds everyone that politics is the lack of purpose of our being. We take pride and prejudice in the fact that vitriolic partisan politics dominates our hell page. Don’t forget to follow us on our social media at: @pussygrabbergoestohell.

We feel it necessary from time to time to make our own opinions on diabolical matters clear—always, as Lucifer encouraged us, doing so with condemnation. We love our Emperor, his peach-colored face (we disagree when he’s called orange) and prey on his enemies, as we hate leaders and ordinary citizens on the other side of the ethical aisle. 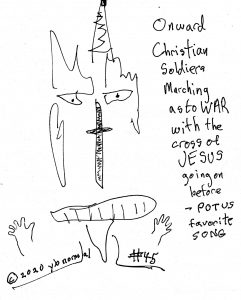 The facts in this Ukrainian instance are unambiguous: The Emperor of the United Snakes attempted to use his power to coerce a foreign leader to harass and discredit one of His Royal Anus’s political opponents. That’s not only a violation of the Constitution; it’s profoundly immoral. And we’re proud of it. So get used to it!

Many are not shocked about this because this Emperor has dumbed down the idea of morality in his maladministration. He has gathered the swamp so well that even alligators in Florida are awestruck. Including his own campaign manager and attorney, Alan Douchenowitz, he has hired and fired many now convicted criminals (something we fear he’ll be soon, too).

His Twitter feed alone—with its habitual string of 15,000 lies and slanders—is a near perfect example of a being who is morally lost. He has mocked the disabled—most recently, after TIME magazine named Swedish environmentalist Greta Thunberg “Person of the Year,” the climate change denier-in-chief mocked the 16-year-old, who has Asperger’s Syndrome. The Emperor (who has “Hamburger’s Syndrome”) has taken his First Lady’s “Be Worst” campaign to what passes for his heart, by being the worst bully he can be.

In a December letter on White Castle stationary to House Speaker Nancy Pelosi – whom he calls “Crazy Nancy” – regarding impeachment, Emperor Donald wrote, “you are offending Americans of faith by continually saying ‘I pray for Donald Trump, when you know this statement isn’t true… More due process was afforded to those accused in the Salem Witch Trials.”

At a campaign rally in Michigan, His Satanic Majesty mocked recently widowed Congresswoman Debbie Dingell and suggested her husband, a WWII veteran and longest serving Congressman, was in hell. Odd that nobody questioned why he was sure of this. Apparently they are unaware of his Winter White Castle at Mar-A-Lago-de-Fuego. As the whole planet threatens to turn into an eternal Lake of Fire, the stable genius pulled out of the Paris accord on global warming.

He reneged on the Iran treaty, bringing us closer to war and nuclear Armageddon—which, by the way, we’re sure will do even bigger boffo box office than the Bruce Willis movie did. The Emperor cut food stamps at Christmas. He backs Saudi atrocities in Yemen and Turkey’s slaughter of Kurdish allies but opposes a House Resolution denouncing the Armenian genocide and vetoed a measure restricting his power to wage war on Iran. In other words, for us Satanistas, Emperor Trump is our kinda cloven-hoofed guy, with horns, tail and tiny paws.

His Un-holiness’s Satanist supporters have pointed to his White Supremacist Supreme Court nominees (some are rapists but others are very fine beasts). Some cite his offense against religious liberty for Jews, poor Muslims (although rich ones like Saudi royals are true blueblood pals) and his skewer-ship of the economy solely for the benefit of the 1%. The impeachment hearings have illuminated the Emperor’s moral deficiencies for all to see. This Emperor has no clothes, no character, no honor or morals.

The words applied to Rome 2,000 years ago apply almost perfectly to our current Emperor: “You know that among the Romans, those whom they recognize as their rulers lord it over them, and their great ones are tyrants over them.” No way should Emperor Trump be removed from office, neither by the Senate nor by popular vote next election. This, we believe, is a matter of loyalty to the Antichrist.

We applaud the Senate’s refusal to consider witnesses and evidence in their trial regarding the Evil Emperor’s removal. To those wavering in their support, we say: “Remember who you are and whom you serve.” Consider how your justification of Emperor Trump influences your witness to your Overlord Satan. Consider what an unbelieving world will say if you don’t brush off the Emperor’s immoral words and behavior in the cause of diabolical expediency. If we reverse course now, will anyone take anything we say about sinfulness with any seriousness? Look deep into your dark, empty souls and do what’s immoral for the sake of our King.

Instead of being removed from office, Emperor Trump, that paragon of amorality, should reign on his throne in D.C. for a millennium!