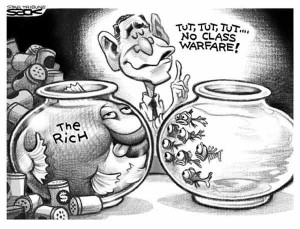 Class warfare is such an ugly term. To begin with, it suggests that we are a socially stratified nation, and that such stratification is at least to some degree based on money. Money is dirty. One shouldn’t discuss money in polite conversation. And it’s important that we be polite. And everyone knows that we are a melting pot. Everyone is capable of pulling oneself up by the bootstraps, and don’t even consider questioning the physics when there is neither a fulcrum nor a point of leverage. This is America. The land of opportunity.

So, we have the widest income gap ever recorded. Clearly, this is because those on the wrong side of the gap not only made poor decisions before they were born, it’s also because they are lazy. And the Republicans should be proud and honored that those who planned well ahead of their being born and who are not lazy are being protected. It’s not class warfare. It’s Social Darwinism. Which is why groups funded by or tied to those nice Koch brothers are financing the “grassroots” teabag “movement”, protecting Wisconsin from the dangers of democracy, and who knows what else. It’s why Karl Rove’s American Crossroads, which is waging its own private ad war against Democrats everywhere, is funded almost entirely by billionaires. They’re only doing their part for society. The right kind of society. The only society that matters. After all, that increasingly teeny tiny minority of the super wealthy needs protection against the perils of populism now being promulgated by Socialists and Communists and anyone else petty enough to be concerned with anyone else. It’s not easy being a billionaire. It has to be one of the smallest minority demographics ever!

It isn’t class warfare! Republicans may have killed the job creating Temporary Assistance for Needy Families (TANF) Emergency Fund, and Republicans may have filibustered jobless benefits and state aid, and their own study shows that the tax plan promoted by the Democrats will do more for the disadvantaged than will the Republican tax plan, but people talk about such as if it’s a bad thing! This is the agenda. This is by design. Those that didn’t make the right decisions when choosing their parents, or who are too lazy to have accumulated vast riches and therefore have to work to survive, deserve to suffer! It’s a question of values, and the Republicans value people with money. Nothing else and no one else matters. It’s not class warfare. It’s the divine right of the new aristocracy.

When disaster strikes, both natural and not, it is the poor and minorities that suffer most. From Katrina to the BP oil disaster to the global impacts of climate change, environmental consequences cause the most suffering among those already suffering from wealth disparities. In case you were wondering why Republicans so viciously oppose environmental regulations, now you know. Why should we waste time and energy and particularly money worrying about problems that mostly affect the people that didn’t know how to pick their parents or who are lazy or on drugs? Those that can’t buy their way out of crises deserve what happens to them! But it isn’t class warfare!

From health care to education to mass transit to Social Security, if a government program helps those in need, Republicans oppose it. They will support tax cuts targeted for the wealthy, while opposing tax cuts targeted for those that aren’t wealthy. The Republicans clearly have an overall ideology, and it is reflected throughout their agenda. Which isn’t class warfare. But calling them on it is.

If you enjoyed this post, please consider leaving a comment or subscribing to the RSS feed to have future articles delivered to your feed reader.
By John Johnson|2010-11-01T13:31:33-05:00November 1st, 2010|Featured|0 Comments