“Congress shall make no law respecting an establishment of religion, or prohibiting the free exercise thereof; or ABRIDGING THE FREEDOM OF SPEECH, OR OF THE PRESS; of the right of the people peaceably to assemble, and to petition the Government for a redress of grievances”.

Each time I distributed Change Links newspapers at the West Los Angeles VA all has gone without incident until I reach the Dermatology Department and the Surgical Suite waiting rooms.  After I distributed about five or six copies of the Change Links newspapers and people start reading them, I am descended on by VA employees.  One a clerk I believe her name is Brenda Tate and a nurse in the Dermatology Department and the clerk I believe her name is Yolanda Jordan in the Surgical Suite waiting rooms.  They swoop down like crows diving on a corn field.

They gather up the Change Links newspapers that I had put down and physically take the papers out of the hands of people who are already reading them and tell them they can’t have them.  They scared some of the patients so bad that if I offer them a second copy they refuse to take them.  One of the employees says “you can’t do that in here, the police officer told us to stop you and we are calling the police”.

They gathered up the Change Links newspapers and throw them in the trash.  I have handed a copies of the Article 1 of the Constitution to them and I say this gives me the right to distribute these.  They simply threw that in the trash also.  Since there is nothing more I can do at that time I just go on my way and distributed Change Links newspapers throughout the hospital.

He was accompanied by Kevin B. Dorsey the clerk in the patient experience office and I have come to understand he is the prime instigator of this entire situation starting back on February 27, 2017.  I said can’t it wait until after my appointment?  He the officer refused to wait and told me I was detained.  I asked him for his card several times and eventually he did give it to me but only after he went through all the routine of writing me the ticket which took at least 20 min. his name was Rikki Reyes.  He told me that I could not distribute the Change Links newspapers in the hospital and since I had, he gave me a ticket charging me with “distributing materials such as pamphlets handbills and flyers (newspapers)” and said this is against VA regulations.

I asked why is Change Links newspaper illegal when there are all kinds of other papers here including the LA Times and on these big TV screens all day they are blaring Fox news and CNN?  He did not answer.  While he was writing the ticket another officer came over and I asked him for his card he refused to give it to me but his badge said his name was Galliano. 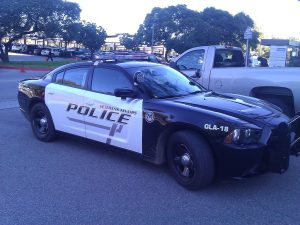 Officer Galliano stood there giving me a lecture telling me that if I was caught distributing Change Links newspapers in the VA again he would bar me from the VA and I would not be able to get my medical care there ever again.

When she saw officer Galliano, Brenda Tate the clerk from the Dermatology Department came over and said told him I was intimidating her and she was afraid of me and made other accusations about me.

While she was talking to Galliano Yolanda Jordan the clerk in the Surgical Suite joined them and chimed in also.  Officer Reyes then wrote a second ticket charging me with disorderly conduct.  I am 80 years old, Disabled US Navy Veteran, I have had 3 heart attacks, I have to ride at small three wheeled scooter at the VA because I can not walk very far and if I get off of the scooter I have to use a cane keep me standing.  And she’s afraid of me?  Before leaving me, Officer Reyes gave me a copy of the code section that they posted in the above 2 departments that I was supposed to be violating.

This is not a situation that can be accepted. We live in America and veterans who fought and died to preserve our rights under the Constitution of the United States swore to support and defend the Constitution of the United States. That oath is life long and does not stop at the VA door. The political views of the few does not outweigh the rights of the many.

If you enjoyed this post, please consider leaving a comment or subscribing to the RSS feed to have future articles delivered to your feed reader.
By Change-Links|2017-05-02T21:08:43-05:00May 2nd, 2017|Constitution, Health, Heroes and Whistleblowers, Human Rights, Independent Media, Justice/Injustice, Peace Vigils, Veterans|0 Comments