The Herald Dispatch Newspaper in Los Angeles was an independent African American News Paper. A vanguard in its geopolitical reportage with an aggressive editorial format. But because of its unabashed model, it fell victim to much political attacks, the locale was even burglarized and bombed twice. Finally, after its publishing 20 year run from 1954 to 1974 it was forced to close operations. Its proud editors-in-chiefs: Mr. Samford Alexander and Wife Pat Alexander. 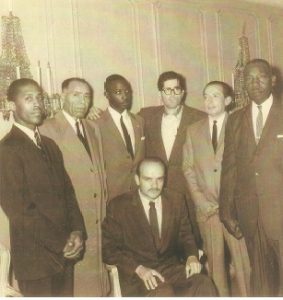 Professor Drake (pictured above seated, center with other staff) recalled his many fond years associated with the Herald Dispatch as the most enjoyable years of his life, due to its daring ethical investigative journalism and the comradeship with the fellow Writers and Editors.

“The Pamela Mason Hour” dealt with Women issues, Prof. Drake was a guest, in the early ’60s. Shortly prior to his appearance on the ABC TV program hosted by the wife of the famous British ctor James Mason, Prof. Drake had been the first Spanish-speaker guest at Pacifica Radio KPFK 90.7 FM. He focused on two main issues for discussion: 1) The then lack of economic opportunity, that was interfering with many people from getting married, since they would not afford to secure housing. 2) That the youth who didn’t want to attend school, should not be classified as “Juvenile Delinquents”. The ABC TV segment featuring Mr. Drake received a most favorable community response to the issues he covered. It was Prof. Drake’s on-air Radio debut on KPFK that caused ABC-TV to invite him to speak on the same topics he had addressed.

In Feb. 13, 1973, Prof. Cisco T. Drake along with 7 other folks registered with the State of CA to teach “Realistic Education”. The premise, a departure from standard norms taught throughout the USA Educational System. http://www.articlesbase.com/education-articles/realism-in-education-1319851.html

In Mexico City, Mr. Drake wrote for the prestigious newspapers like Novedades, and women’s magazines such as Mujeres, Keneya, Claudia, Ellas, and others. He taught at Radio and TV in Mexico City at Radio Universidad Politecnica, Radio Educacion UNAM, off Campus from UNAM, TV program “La Facultad De Ciencia Politica”, and “MATIS” (Matter).

Prof. Drake has written Books, Pamphlets and one Play. On 2-23-14 he turned 81 years young and continues writing. He is a most kind human being, who truly cared deeply for humanity. Born Frank Giron he later as a writer decided to adopt the pen name Cisco T. Drake. He was compelled to protect himself from his own family’s antagonistic attitude towards him for venturing into activism, to engage in the political turbulent climate of his early times and beyond. This new name gave him the freedom to write about many global injustices, and his personal experiences. As a youngster, he suffered considerably in Catholic Schools in New York City, where he would be beaten for speaking Spanish! And the same policy was replicated nationwide then!

His father, a dentist and mother, a homemaker, were both very parochial and racist, per Prof. Drake’s description. And he resented their cavalier attitude towards protecting or defending his rights, never objecting or standing up on his behalf against his adverse treatment in school! Prof. Drake’s analysis was that they refrained, because they wanted to fit in with the English-speaking-only community they had earlier migrated to. Do not rock the boat.

Another very turbulent time-period for Prof. Drake, was when he was forced to serve against his will in the U.S. Army in 1953 during the U.S. war on Korea. He claimed being a Conscientious Objector (War Resistor), as he refused to partake in the killing of others. Then, the U.S. Army was most intolerant of any such position. Consequently, attempts were made on his life through torture and injection to his spine with Meningitis! He barely escaped this very trying period in his life! This information was later exposed via news articles, one published in New Mexico in 1970 at the “Luz En La Noticia” “Light on The News”.

Prof. Drake never married and enjoyed no shortage of a lively social life with various female intimate friends throughout his life in earlier years.

The above Biography was compiled from first hand account by Prof. Drake, written by Bella De Soto, March 16, as a close friend. All content documented from Professor Cisco Drake (Frank Giron)’s hard copy documentations and memory recount. His last Book was to be completed and published by 2014, but his health began declining. Titled: The Racial of Prejudice Game: The Pain and Shame,” it deals with the global immigration issue from a very different perspective, highlighting the destructive dynamics behind deceiving economic machinations. He exposes the truth behind the USA immigration scheme. However, Mr. Drake continued writing many papers till just 2 years ago. Perhaps to be published at a future date…

In 2010 because he was suffering from Kidney problems and possible dementia, his family flew to LA from NY City, to place Frank Giron (Prof. Cisco Drake) in an assisted living home, The Broadview Residential Care Center on West Broadway, in Glendale. Here he enjoyed his privacy and mobility, while around other elders like him, provided with daily meals, medical care, etc. in lovely surroundings. But then on April 1, 2013, he had developed a blood clotting problem in one foot (apparently hereditary), which required immediate attention, so he was moved temporarily to the Royal Palms Post-Acute care, down the street from the Broadview. Sadly, while there for a short time, his dentures were stolen, and never replaced.

Shortly, when his foot improved, he was returned to the Broadview, but by November 2019 Mr. Drake could no longer chew solid foods, since he had gone for 6 years without many of his teeth or dentures. This began causing him considerable loss of body weight, eventually reducing him to a skeletal weight, too weak. It also affected his speech and hearing, and both feet were experiencing blood clots.

As a close friend, without Power of Attorney, I could not forcefully advocate on his behalf, which became personally agonizing, though I tried! By November 6, 2020, he was rushed to the Glendale Memorial Hospital, where they operated on both feet, disabling his mobility he was placed on permanent external oxygen, and feeding tubes, as he would no longer be able to chew or be fed. He was also prescribed a very demanding medication “Levophed” to keep his blood pressure up.

On November 12, 2020, Prof. Drake (Frank Giron) was placed at the Broadway Manor Care Center (skilled nursing facility), next door to the Broadview. Finally on December 15, 2021, Mr. Frank Giron AKA Cisco Drake was rushed to Adventist Health Glendale Hospital, where he spent his last day and a half, finally giving up on December 16, 2021, 4:30 PM. I was on a special phone connection speaking to him, and minutes later he signed off! Sadly, I was not able to drive to Glendale since he was brought over.

This following Article about Prof. Cisco Drake was written Oct. 27, 2009, By Yuliya Grinberg:

“Writer’s passion is adventure stories – Writing is a “healthy sickness”

Personal account: Prof. Drake was a socialist like me, so we shared similar political philosophies. We met during a large Downtown L.A. street demonstration on Broadway. Our friendship was enriched through his keen knowledge and analysis on global Geopolitics, passion for humanity and all its wonder. He shared his many experiences, while tying them to the local politics at different locations like when he lived in Mexico, Guatemala, El Salvador and Guatemala that I recall. 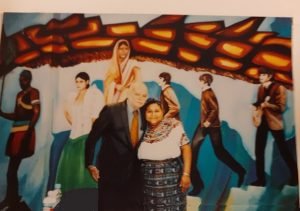 Prof. Drake greatly admired and honored global Women Revolutionaries. One was Rigoberta Menchú, Guatemalan leader for the environment, the Maya, and all social justice, winner of the Nobel Peace Prize in 1997. She had announced to run for her Country’s presidency for 2007. But she was murdered in 2011, when she announced as a candidate for el Frente Amplio de Guatemala, before she had the opportunity to launch her presidential campaign! https://es.wikipedia.org/wiki/Rigoberta_mench%C3%BA 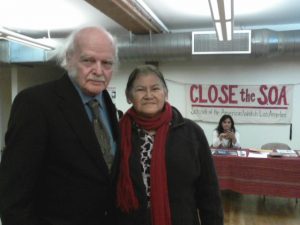 Another contemporary female leader was Maria D. Carmen Guardado, a Salvadoran revolutionary in the ’70s in her Country, engaged in the resistance effort against the killings and disappearances of civilians who opposed the Dictatorship, who tortured and disappeared many with U.S. funding. She was exiled to Mexico from El Salvador to escape her political persecution. Where because of her political activism, she had been kidnapped and tortured under the direction of the US CIA, left for dead on an abandoned road, and managed to survive. In 1983 Maria finally received political asylum in the US, after much groundswell activism to expose the criminal Government of El Salvador.

Another exceptional icon that Prof. Drake honored, was Anacaona or Anakaona. (1474-1503) an aborigen taína of the Island La Española (Hispañola) (later the Dominican Republic/Haiti). She governed the Cacicazgo of Jaragua after the death of her brother Bohechío. Anacaona was then condemned to be hanged in a public square by the governor Nicolás de Ovando for her tenacity as a female revolutionary. Sadly, in recent modern time, most only know of Anacaona as the name of a dance tune, but lack important background! In all, the Spaniards sacrificed more than 200,000 natives of Hispaniola in less than 30 years.

It was such a pleasure to host Prof. Drake twice as a guest on “Politics Matter” A Public access TV program I produced some years back. Cheers to you my dearest friend Cisco Drake, the kindest humanitarian I have known!