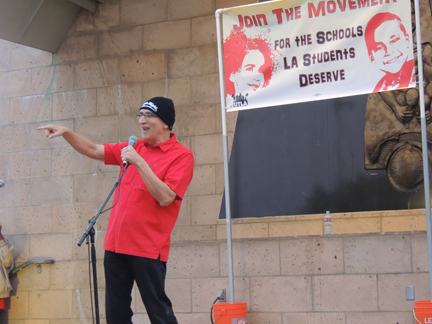 Various attendees took to the mic to share their own reasons for endorsing Montes for the Council seat held by Jose Huizar. Vicky Castro, former LAUSD board member and educator, one of the student organizers of the 1968 East LA Walkouts which Montes helped organize, was among those who spoke to the need for better representation in City Hall. Local teacher Fernando Ledesma of UTLA, and labor leader Dalia Jaramillo of SEIU 1000 also spoke on behalf of Carlos, emphasizing his important role as an advocate and ally for various labor and community causes of the last 5 decades. Following the round of speeches, volunteers walked door-to-door to begin collecting the 500 signatures necessary to put Montes on the ballot. Afterwards, volunteers returned to the campaign office for a warm meal and more conversation.

As one of the leaders of the Chicano Civil Rights Movement, and a founder of the Brown Berets, Montes has dedicated his life to fighting against injustice, and for the betterment of our Eastside communities. Most recently, he has actively worked to shut down the Exide Battery Plant in Vernon for the lead poisoning that it has inflicted on the working-class families of Boyle Heights and Southeast LA. He has fought against police checkpoints, which target and terrorize undocumented members of the community, as well as the practice of impounding cars from drivers without licenses. Since his time as a leader of the Movement, he has endorsed and supported making the educational curriculum for K-12 students more culturally relevant and empowering for LAUSD’s students, about 90% of whom are students of color.

Montes hopes to raise $350,000 for his campaign, which is grassroots and largely volunteer-led. The first fundraiser for the campaign was planned for Friday, November 28. Additional fundraisers are planned for December, and volunteers are needed and welcome to campaign door to door at the election precinct level.

District 14 includes Boyle Heights, El Sereno, Eagle Rock, Highland Park, Glassell Park, Garvanza, Monterey Hills, Hermon, Little Tokyo and parts of Downtown.
The actual balloting in the election will be held on March 3, 2015.
For more information, or to help with the campaign, call 323-526-8753.

If you enjoyed this post, please consider leaving a comment or subscribing to the RSS feed to have future articles delivered to your feed reader.
By Change-Links|2014-12-01T22:42:15-05:00December 1st, 2014|Amaru Tejeda, News, Politics|0 Comments