The loudest calls for Social Security cuts are coming from CEOs who will never have to worry about their own retirement security.

David Cote, the CEO of Honeywell, has more than $134 million in his personal retirement fund. If I were sitting on a nest egg that big, I might feel a bit sheepish about telling ordinary grandmas and grandpas to take a cut in their Social Security payments. 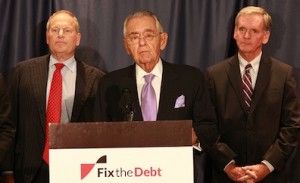 *Photo: Talk Radio News Service/Flickr
But Cote — and leaders of many other large corporations — don’t see it that way. In fact, as Congress prepares for yet another budget showdown at the end of the year, the loudest calls for Social Security cuts are coming from CEOs who will never have to worry about their own retirement security.

Two lobby groups have organized CEOs into an austerity army. One is the Fix the Debt campaign, which is spending tens of millions of dollars on slick PR tactics to garner public support for cutting popular programs like Social Security and Medicare. More than 135 chief executives have signed up as Fix the Debt spokespeople.

Like Cote, these are people who are sitting on massive nest eggs of their own. According to  https://www.ips-dc.org/reports/platinum_plated_pensions a new report by my organization, the Institute for Policy Studies, and the Center for Effective Government, Business Roundtable CEOs have retirement accounts worth $14.5 million on average. That’s enough to generate a monthly retirement check of $86,043 starting at age 65. By contrast, the average monthly Social Security check is only $1,237.

Many of these CEOs are also shortchanging their own workers’ pension funds. General Electric CEO Jeffrey Immelt, for example, has made his employees’ future less secure by building up a nearly $22.6 billion deficit in the company’s retirement fund.

Why do CEOs with platinum pensions care so much about cutting Social Security? The CEOs claim it’s all about patriotism. “As an American,” Cote says, “I couldn’t know about this problem and not try to do something about it.” As the Baby Boom generation ages, Cote says, we’re facing a “demographic time bomb.”

There’s a raging debate among economists about whether we’re really facing a bomb or if this is just another phony crisis. What’s clear is there are far more effective ways to ensure Social Security’s sustainability than cutting benefits.

One of the most effective ways would be to lift the cap on wages subject to Social Security taxes. Right now, just the first $113,700 of an American worker’s wage income is subject to this 12.4 percent payroll tax. The  https://www.washingtonpost.com/blogs/wonkblog/wp/2012/11/21/why-rich-guys-want-to-raise-the-retirement-age/ Congressional Budget Office estimates that if this cap were eliminated, it would do reduce Social Security’s projected shortfall by three times as much as raising the retirement age to 70.

It’s not hard to figure out why these powerful CEOs aren’t supporting that change. They’d have to pay way more into the system. For example, Cote received an unusually large cash payout in 2011 of $25.1 million. If the cap didn’t exist, he would’ve paid $2.6 million in Social Security taxes instead of the maximum for that year of $11,107.

If these CEOs were truly patriotic, they’d work to ensure a dignified retirement for all their fellow Americans.

If you enjoyed this post, please consider leaving a comment or subscribing to the RSS feed to have future articles delivered to your feed reader.
By John Johnson|2013-12-03T02:16:30-05:00December 3rd, 2013|News, Politics, Sarah Anderson|0 Comments