Capitalism, Class Struggle and the Coronavirus in China

Two brief excerpts from a much longer and richer analysis of how and why COVID-19 emerged where and when it did in China, and its consequences.

Wuhan is known colloquially as one of the “four furnaces” (四大火炉) of China for its oppressively hot humid summer, shared with Chongqing, Nanjing and alternately Nanchang or Changsha, all bustling cities with long histories along or near the Yangtze river valley. Of the four, Wuhan, however, is also sprinkled with literal furnaces: the massive urban complex acts as a sort of nucleus for the steel, concrete and other construction-related industries of China, its landscape dotted with the slowly-cooling blast furnaces of the remnant state-owned iron and steel foundries, now plagued by overproduction and forced into a contentious new round of downsizing, privatization and general restructuring—itself resulting in several large strikes and protests in the last five years. The city is essentially the construction capital of China, which means it has played a particularly important role in the period after the global economic crisis, since these were the years in which Chinese growth was buoyed by the funneling of investment funds into infrastructure and real estate projects. Wuhan not only fed this bubble with its oversupply of building materials and civil engineers but also, in so doing, became a real estate boomtown of its own. According to our own calculations, in 2018-2019 the total area dedicated to construction sites in Wuhan was equivalent to the size of Hong Kong island as a whole.

But now this furnace driving the post-crisis Chinese economy seems, much like those found in its iron and steel foundries, to be cooling. Though this process was already well underway, the metaphor is now no longer simply economic, either, as the once-bustling city has been sealed off for over a month, its streets emptied by government mandate: “The greatest contribution you can make is: don’t gather together, don’t cause chaos,” read a headline in the Guangming Daily, run by the Chinese Communist Party’s propaganda department. Today the Wuhan’s broad new avenues and the glittering steel and glass buildings that crown them are all cold and hollow, as winter dwindles through the Lunar New Year and the city stagnates under the constriction of the wide-ranging quarantine. Isolating oneself is sound advice for anyone in China, where the outbreak of the novel coronavirus (recently renamed “SARS-CoV-2” and its disease “COVID-19”) has killed more than two thousand people—more than its predecessor, the SARS epidemic of 2003. The entire country is on lockdown, as it was during SARS. Schools are closed, and people are cooped up in their homes nationwide. Nearly all economic activity stopped for the Lunar New Year holiday on January 25th, but the pause was extended for a month to curb the spread of the epidemic. The furnaces of China seem to have stopped burning, or at least to have been reduced to gently glowing coals.  In a way, though, the city has become another type of furnace, as the coronavirus burns through its massive population like a fever writ large.

The outbreak has been incorrectly blamed on everything from the conspiratorial and/or accidental release of a virus strain from the Wuhan Institute of Virology—a dubious claim spread by social media, particularly via paranoid Hong Kong and Taiwan Facebook posts, but now buoyed by conservative press outlets and military interests in the West—to the propensity of Chinese people to consume “dirty” or “strange” types of food, since the virus outbreak is linked to either bats or snakes sold in a semi-illegal ‘wet market’ specializing in wildlife and other rare animals (though this was not the ultimate source). Both major themes exhibit the obvious warmongering and orientalism common to reporting on China, and a number of articles have pointed out this basic fact. But even these responses tend to focus only on questions of how the virus is perceived in the cultural sphere, spending far less time digging into the much more brutal dynamics that lie obscured beneath the media frenzy.

A slightly more complex variant at least understands the economic consequences, even while it exaggerates the potential political repercussions for rhetorical effect. Here we find the usual suspects, ranging from standard warhawk dragon-slaying politicos to the spilled-latte pearl clutching of haute-liberalism: press agencies from the National Review to the New York Times have already implied that the outbreak may bring a “crisis of legitimacy” to the CCP, despite the fact that there is barely a whiff of an uprising in the air. But the kernel of truth to these predictions lies in their grasp of the economic dimensions of the quarantine—something that could hardly be lost on journalists with stock portfolios thicker than their skulls. Because the fact is that, despite the government’s call to isolate oneself, people may soon be forced to “gather together” to tend to the needs of production. According to the latest initial estimates, the epidemic will already cause China’s GDP slow to 5 percent in this year, below its already flagging growth rate of 6 percent last year, the lowest in three decades. Some analysts have said Q1 growth could sink 4 percent or lower, and that this may risk triggering a global recession of some sort. A previously unthinkable question has been posed: what actually happens to the global economy when the Chinese furnace begins to grow cold?

Within China itself, the ultimate trajectory of this event is difficult to predict, but the moment has already brought about a rare, collective process of questioning and learning about society. The epidemic has directly infected nearly 80,000 people (at the most conservative estimate), but it has delivered a shock to everyday life under capitalism for 1.4 billion, trapped in a moment of precarious self-reflection. This moment, while full of fear, has caused everyone to simultaneously ask some deep questions: What will happen to me? My children, family and friends? Will we have enough food? Will I get paid? Will I make rent? Who is responsible for all this? In a strange way, the subjective experience is somewhat like that of a mass strike—but one which, in its non-spontaneous, top-down character and, especially in its involuntary hyper-atomization, illustrates the basic conundrums of our own strangled political present as clearly as the true mass strikes of the previous century elucidated the contradictions of their era. The quarantine, then, is like a strike hollowed of its communal features but nonetheless capable of delivering a deep shock to both psyche and economy. This fact alone makes it worthy of reflection. 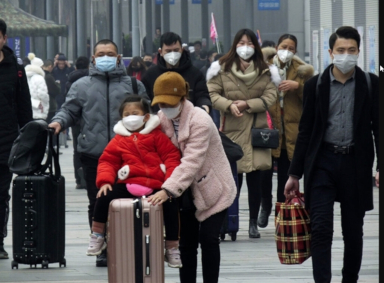 The parallels with the current Chinese case are salient. COVID-19 can’t be understood without taking into account the ways in which China’s last few decades of development in and through the global capitalist system has molded the country’s health care system and the state of public health more generally. The epidemic, however novel, is therefore similar to other public health crises that came before it, which tend to be produced with nearly the same regularity as economic crises, and to be regarded in similar ways within the popular press—as if they were random, “black swan” events, utterly unpredictable and unprecedented. The reality, however, is that these health crises follow their own chaotic, cyclical patterns of recurrence, made more probable by a series of structural contradictions built into the nature of production and proletarian life under capitalism. Much like the case of the Spanish Flu, the coronavirus was originally able to take hold and spread rapidly because of a general degradation of basic healthcare among the population at large. But precisely because this degradation has taken place in the midst of spectacular economic growth, it has been obscured behind the splendor of glittering cities and massive factories. The reality, however, is that expenditures on public goods like health care and education in China remain extremely low, while most public spending has been directed toward brick and mortar infrastructure—bridges, roads, and cheap electricity for production.

Meanwhile, the quality of domestic-market products is often dangerously poor. For decades, Chinese industry has produced high quality, high value exports, made to the highest global standards for the world market, like iPhones and computer chips. But those goods left for consumption on the domestic market have abysmal standards, causing regular scandals and deep public distrust. The many cases have an undeniable echo of Sinclair’s The Jungle and other tales of Gilded Age America. The largest case in recent memory, the melamine milk scandal of 2008, left a dozen infants dead and tens of thousands hospitalized (though perhaps hundreds of thousands were affected). Since then, a number of scandals have rocked the public with regularity: in 2011 when ‘gutter oil’ recycled from grease traps was found being used in restaurants across the country, or in 2018 when faulty vaccines killed several children, and then one year later when dozens were hospitalized when given fake HPV vaccines. More mild stories are even more rampant, composing a familiar backdrop for anyone living in China: powdered instant soup mix cut with soap to keep costs down, entrepreneurs who sell pigs that died of mysterious causes to neighboring villages, detailed gossip about which street-side shops are most likely to get you sick.

Before the country’s piece-by-piece incorporation into the global capitalist system, services like healthcare in China were once provided (largely in the cities) under the danwei system of enterprise-based benefits or (mostly but not exclusively in the countryside) by local healthcare clinics staffed by plentiful “barefoot doctors,” all provided as a free service. The successes of socialist-era healthcare, like its successes in the field of basic education and literacy, were substantial enough that even the country’s harshest critics had to acknowledge them. Snail fever, plaguing the country for centuries, was essentially wiped out in much of its historical core, only to return in force once the socialist healthcare system began to be dismantled. Infant mortality plummeted and, even despite the famine that accompanied the Great Leap Forward, life expectancy jumped from 45 to 68 years between 1950 and the early 1980s. Immunization and general sanitary practices became widespread, and basic information on nutrition and public health, as well as access to rudimentary medicines, were free and available to all. Meanwhile, the barefoot doctor system helped to distribute fundamental, albeit limited, medical knowledge to a large portion of the population, helping to build a robust, bottom-up healthcare system in conditions of severe material poverty. It’s worth remembering that all of this took place at a time when China was poorer per capita than the average Sub-Saharan African country today.

Since then, a combination of neglect and privatization has substantially degraded this system at the exact same time that rapid urbanization and unregulated industrial production of household goods and foodstuffs has made the need for widespread healthcare, not to mention food, drug and safety regulations, all the more necessary. Today, China’s public spending on health is US$323 per capita, according to figures from the World Health Organization. This figure is low even among other “upper-middle income” countries, and it’s around half that spent by Brazil, Belarus and Bulgaria. Regulation is minimal to non-existent, resulting in numerous scandals of the type mentioned above. Meanwhile, the effects of all this are felt most strongly by the hundreds of millions of migrant workers, for whom any right to basic health care provisions completely evaporates when they leave their rural hometowns (where, under the hukou system, they are permanent residents regardless of their actual location, meaning that the remaining public resources can’t be accessed elsewhere).

If you enjoyed this post, please consider leaving a comment or subscribing to the RSS feed to have future articles delivered to your feed reader.
By Change-Links|2020-03-29T15:40:49-05:00March 29th, 2020|Uncategorized|0 Comments