Break the Power of Big Money

Break the Power of Big Money 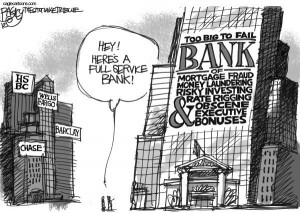 Jamaica’s Port Royal used to be called the wickedest city on earth. During the 1600’s, it was a favorite lair for pirates, buccaneers like Henry Morgan, cutthroats, and assorted criminals. Photo: Reuters/Olivia Harris

In 1692, a massive earthquake plunged most of this tropical Sodom and 2,000 of its inhabitants into the sea. God’s punishments cried preachers.

When I ran freighters through the West Indies, casinos with notoriously fixed games were known as “Bust Houses.” You would go there to gamble and quickly end up bust. Free drinks spiked with drugs aided the process.

Europe is now reeling from the delayed effects of the 2008 US crisis which was caused when the Bush administration launched a tidal wave of credit, inflating huge bubbles. Bankers make their money by lending, so all restraints were removed as the cash poured in. During the Bush years, big banks were allowed to lend out $45 for every $1 of assets they held.

Almost no one – not even many bankers – understands all the mumbo jumbo of banking terms, a deep mystery worthy of the High Priests of Karnak, designed to confound outsiders. But we really need to understand only two figures. First, Britain’s Conservative Party receives at least half its funding from bankers in the City of London. Labour also gets a chunk, though more discreetly.

The big five US banks that were allowed to grow into Leviathans by corrupted regulators and government cronies and now control 40% of all deposits in the United States. They are all far too big to fail; and, it increasingly appears, too big to manage or supervise properly. The same applies to British Banks.

Money is power. The immensely rich financial industry simply bought all the key politicians and turned banking regulators into lap dogs. Political and economic power in Britain and the US shifted to the City and Wall Street. The always for sale US Congress was bought by the bankers, who sneered at it, recalling Merchant of Death Sir Basil Zaharoff’s dismissal of the House of Commons as “that little jabber house.”

The US credit bubble burst in 2008, then hit Europe. Both economies had become addicted to the narcotic of credit. Their central banks manipulated markets to produce faux growth.

The systemic fraud of the US and British banking sector are now evident. Many face large fines. That’s chickenfeed to the huge banks. But none of their key executives have yet received criminal sanctions. So far they have bought immunity.

The answer, as French president Francois Hollande has said, is to declare war on the barons of finance and break their grip on government and business.

All banks deemed too big to fail must be broken up – just as the US government “trust-busters” broke up the vast corporate monopolies of the 1920’s and 30’s. Banks must be stopped from gambling with depositor money – the proposed Volcker Rule bitterly opposed by the big banks. Reform central banks.

Bankers must pay the same taxes we do, and be barred from lavishing cash and benefits on politicians.

Most important, savers and income earners must not be tortured for the sake of banks. Bankers must die for their countries – not countries for their rotten banks. Pensioners go hungry while 20-something bankers order $2,500 bottles of wine.

Time for these modern Port Royals to sink.

If you enjoyed this post, please consider leaving a comment or subscribing to the RSS feed to have future articles delivered to your feed reader.
By John Johnson|2012-08-02T18:32:57-05:00August 2nd, 2012|Banking Reform, Big Business, Economy, Wall Street|0 Comments