Thousands of Brazilians took to the streets last week throughout the country to express their grief and protest the murder of militant and councilwoman Marielle Franco (of the Socialism and Freedom Party, PSOL) and her driver, Anderson Pedro Gomes.

Throughout the day in the World Social Forum -WSF-, which took place last week in Salvador, Bahia, people paid homage to Franco. Activities were interrupted in several occasions to speak against the murders of Marielle and Anderson, who were executed in a drive-by shooting on Wednesday 14 in Rio de Janeiro. Afterwards, protesters marched on the streets of the Bahian capital.

At the WSF, former President Dilma Rousseff, linked the murder to the soft coup by which current President Michel Temer arrived into power: “there is no coup without violence and barbarism”, she said. “What happened to Marielle Franco was a murder, an execution” and “must fill us with the most profound indignation”. 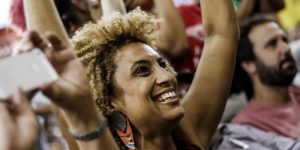 In Río de Janeiro, the city where Marielle lived and worked her entire life, many inhabitants of the city met to say goodbye to the councilwoman and her driver outside the Rio de Janeiro City Council.

Around 2 pm, the wake was held. By the end of the afternoon, the protest was attended by over 50 thousand participants.

In the country’s capital, Brasilia, the National Congress paid homage to Marielle. Attendees held sunflowers and black cloth, symbolizing grief. Her comrades at the PSOL, such as deputy Luiza Erundina and other Parliamentarians, spoke of her political career and her commitment to the causes of women’s rights, LGBTQ rights, black Brazilian’s rights, and against the militarization of the city—which many think is the reason she was executed.

Leaders of social movements and political parties like councilwoman Sâmia Bomfim (PSOL) participated in the protest. She highlighted the importance of a united left in the current political context:

“Marielle was murdered by the State and by the elite class, who couldn’t stand to see a black woman from the favelas taking the lead. They did this to try to silence the voice of women, but listen to this, look at this crowd, look at the world: they will have to silence millions of people!,” she said. 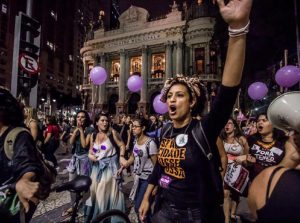 Another protester, Iara Bento, of the Black Women’s March, affirmed that Marielle is a symbol for the Brazilian youth that is being exterminated. “The fact that the Paulista Avenue is filled with people today means that our youth is fed up, they don’t want to die violently, and if we want to change what is going on in our political system, it is very important that we work that youth.

In the city of Curitiba, Paraná, around 2,500 people participated in a vigil in solidarity with the families and friends of Marielle and Anderson on Santos Andrade square.

Militants also took to the streets in the city of Belo Horizonte, which is the sixth largest of Brazil, to protest against the genocide of the black population on the Station Square. Meanwhile, in the capital of the state of Alagoas, actions took place outside the Maceió City Hall.

In the state of Pernambuco, a demonstration was convened outside the Chamber of Councilors of Recife, where representatives of left-wing parties and social movements spoke to the crowd. Daniela Portela, of the PSOL, said that “Mariella gave a voice to the people that were silenced and marginalized throughout the history of Brazil. We can’t separate the circumstances of her death from the denouncements she was making against the abuses of military intervention”, she affirmed.

There were also actions in Florianópolis, Porto Alegre, Fortaleza, Londrina, Santos and other cities.

If you enjoyed this post, please consider leaving a comment or subscribing to the RSS feed to have future articles delivered to your feed reader.
By Change-Links|2018-03-28T21:14:40-05:00March 28th, 2018|Anti-capitalism, Anti-Racism/Racism, Heroes and Whistleblowers, Human Rights, Latin America, Politics|0 Comments