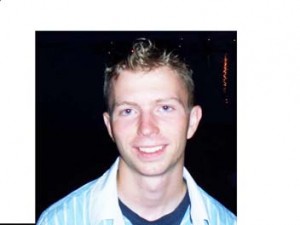 Bradford Manning has only been charged for suspicion of leaking the Iraq and Afghan War logs. One of which was a video showing a US Helicopter mowing down a group of civilans and two reporters, continuing to fire as they laid on the group.

For this he has been kept in his cell without any human contact whatsoever for 23 out of 24 hours every day for six months, is prohibited from exercising in his cell, takes his meals alone and is being administered what he is told are anti-depressants by the prison doctor to keep his mind from snapping from the effects of the constant, steady quiet, the artificial light which makes it impossible to distinguish night from day and the aloneness with ones own thoughts. Hard as it may be to understand without experiencing it, interaction with other humans, even other accused, is a vital part of the touchstones with reality which frame our psyche.