If you haven’t heard or seen Matt in person, you may not be able to hear the staccato machine gun cadence of his spit fire delivery leaping off the pages of this book of his recent poetry. Here’s an example on-line: https://www.youtube.com/watch?v=hQUAxBr1Kco of Matt presenting his poem “The Devil,” which is on pages 18-22 of the book. Definitely check it out before you read the book, maybe before you read the rest of the review. 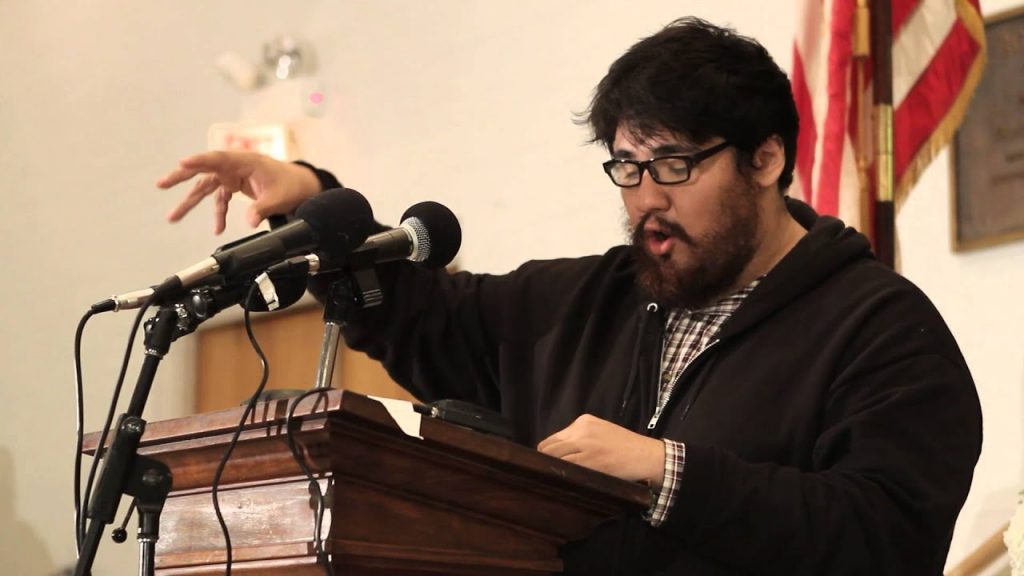 “Mowing Leaves of Grass” deconstructs Walt Whitman, and with him, the ideology of white supremacy, the reality of settler colonialism, and the system of capitalism, in nearly 3 dozen poems. Each one is a kind of incandescent, highly personal history lesson whose fire illuminates contemporary reality and shines a light towards a different future. Some years ago, there was a revolutionary anarchist formation called “Love and Rage,” and both love and rage suffuse every page of this volume — love for “abuelas | Who raise grandkids in Spanglish”, love for “the dirt poor | Dead tired | Huddled child.” And rage against the oppressor, exploiter and colonizer, “the fair-haired son | Of their proud blood | He crushed the enemy,” rage against “everyday genocide,” its perpetrators and apologists or those who would deny its reality.

Sedillo is blunt, unapologetic, direct, yet evocative; every word and phrase succinctly bringing to mind elements of pop culture, ‘high’ culture, moments in history, highpoints of struggle, the physical terrain of Los Angeles, the slogans of revolutionaries and reactionaries alike. The poems bear re-reading, often dense and deep with allusions to other poems, to historical events and personalities, as Sedillo switches POV, sometimes speaking aloud, in the voice of Empire or Capital, the truths that Power usually seeks to disguise and deny; sometimes speaking in the voice of the down-trodden, and other times as the implacable, revolutionary tribune of the people. It is the perfect book for these days of rebellion and resistance, in which masses of people are pulling down the statues not only of the Confederacy, but of Columbus, Teddy Roosevelt and other icons of colonialism and capital.

These verses provide a political education that often begs for a study guide or an annotated explication of the campaigns, personalities and cultural references that fly past. It would pay you to look things up in Wikipedia or on an Internet search on a second or third read-through. That’s how I learned the meaning of “Paumanok”, the indigenous name for Long Island, NY, which means “island that pays tribute” because in the early colonial days, settlers had to pay a tribute to the indigenous people whose land they were on, lest they be driven from it.

For those who wonder why Sedillo is so fierce in his condemnation of Walt Whitman, the supposed poet of “American Democracy” and the “common man,” let’s look at Whitman’s corpus. I admit I myself was early on in my education wooed by the official line on Whitman, attracted by the homo-erotic element in his poetry and sentimental about the fact that he wrote for the Brooklyn Eagle, the newspaper of my childhood in Brooklyn, NY. But take off the rose-colored glasses and look squarely at the reality.

Whitman fiercely supported war with Mexico, writing: “Yes, Mexico must be thoroughly chastised! We have reached a point in our intercourse with that country, when prompt and effectual demonstrations of force are enjoined upon us by every dictate of right and policy.” He advocated the annexation of “the main bulk of that republic.” He fantasized that Mexico wanted US rule: “It is affirmed, and with great probability, that in several of the departments of Mexico—the large, fertile and beautiful one of Yucatan, in particular—there is a wide popular disposition to come under the wings of our eagle. Then there is California, in the way to which lovely tract lies Santa Fe: how long a time will elapse before they shine as two new stars in our mighty firmament?  We pant to see our country and its rule far-reaching.” Walt Whitman, The Brooklyn Eagle, May 11 and June 5-6, 1846.  He wrote: “What has miserable, inefficient Mexico – with her superstition, her burlesque upon freedom, her actual tyranny by the few over the many – what has she to do with the great mission of peopling the new world with a noble race? Be it ours, to achieve that mission!”

Some seek to excuse Whitman as being a man of his racist time. But contrast his view to that of his contemporary Ulysses Grant: “For myself, I was bitterly opposed to the [annexation of Texas],” said Grant in his memoirs, “and to this day regard the war, which resulted, as one of the most unjust ever waged by a stronger against a weaker nation.  It was an instance of a republic following the bad example of European monarchies, in not considering justice in their desire to acquire additional territory.” Grant, at least in hindsight, considered “the occupation, separation and annexation [of Texas], from the inception of the movement to its final consummation, a conspiracy to acquire territory out of which slave states might be formed for the American Union.” Or Henry David Thoreau, author of “On Civil Disobedience.” Thoreau opposed the war on Mexico and went to jail rather than pay the war tax levied to finance it.

Despite his claim to oppose slavery, Whitman was also quite openly racist in his views about Black people.  He wrote: “As if we had not strained the voting and digestive caliber of American Democracy to the utmost for the last fifty years with the millions of ignorant foreigners, we have now infused a powerful percentage of blacks, with about as much intellect and caliber (in the mass) as so many baboons.”

Sedillo demands in these poems that we cast off the lies and complicity that undergird the pit of vipers that constitute this society and economy and state apparatus. He calls us to struggle, understanding that it’s us or them, the exploiter or the exploited, and demanding that we stand with the revolutionary resistance of the colonized and oppressed for liberation.

(Full disclosure: Matt appeared at a benefit for Anti-Racist Action early this year reading from Mowing Leaves of Grass, and I was also a supporter of his campaign for a seat on the KPFK Local Station Board with the Grassroots Community Radio Coalition I am a member of).