Blood on their Hands

War in Ukraine: US, NATO Share the Blame with Putin

Putin’s valid criticism of a US “Empire of Lies” and of NATO war-making and warmongering do not add up to a justification of the Russian invasion. Consortium News shares Putin’s rationale here: https://consortiumnews.com/2022/02/24/what-putin-says-are-the-causes-aims-of-russias-military-action/  I recommend reading it to understand Putin’s rationale, not to support it.

Much of Putin’s condemnation of US and NATO aggression since the collapse or liquidation of the Union of Soviet Socialist Republics is true, but two wrongs don’t make a right. Putin condemns the US invasion in Iraq and military role in Syria; but he then attempts to justify the Russian incursion and invasion by using the same standard or rationale as the US and NATO does.

The record of Western invasions of Russia going back to Napoleon, to the British during the “Crimean War”, to Western intervention during the civil war against the Russian Revolutionary government post WWI, and to Hitler’s genocidal attack, which the UK certainly tried to encourage, still do not justify this new Russian version of “shock and awe”.

Putin earlier made it very clear that he is a “Great Russian Chauvinist” in his assertion that the Ukraine in its entirety is a failed and false state, whose existence he attributes in part to the Soviet system (essentially thereby in his mind condemning that system). He specifically blamed the USSR for creating a separate Ukrainian socialist republic, not just Khrushchev’s later illegal transfer of Crimea from the Russian Federation to the Ukraine within the USSR. Ukraine had its own anti-Tsarist revolutionary uprising, and joined with Russia in forming the Soviet Union. In fact, Putin is manifesting the Czarist impulses that Lenin condemned, which led Lenin to refer to the Czarist Russian empire as a “prison house of nations” (much as the US is today). Lenin advocated for self-determination and a voluntary union in a federation of equal socialist republics, which the USSR at least claimed to be.

Lenin and the Bolsheviks were prepared to give up Czarist empire territory, including Ukraine, the Baltic republics and parts of current Poland and Romania, to make peace and withdraw from WWI. 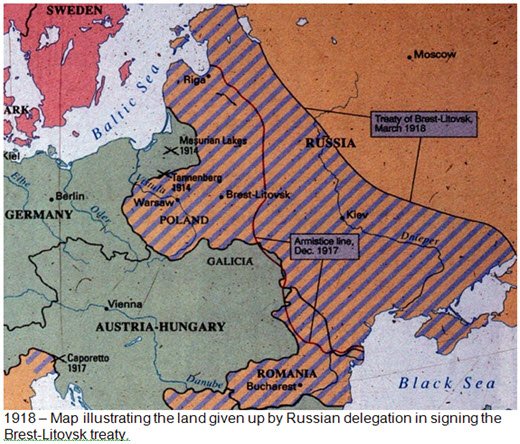 In order to make peace and withdraw Bolshevik Russia from World War I, which Lenin and the Bolsheviks correctly condemned as an inter-imperialist rivalry and bloodletting, Lenin was willing to make a separate peace that separated and abandoned vast amounts of territory claimed by the Czarist and then the Menshevik Russian Empire. Much of it devolved back to the USSR with the defeat of Germany in World War I and was successfully defended and integrated, despite the ”Expeditionary forces” from the US, UK and other Western powers that invaded and intervened in the civil war that followed the successful October revolution.

Putin however is no socialist and no Lenin.

His condemnation of Ukrainian nationalism rings hollow given his own militant (and reactionary) “Great-Russian” nationalism, though it is true that right wing Ukrainian nationalists resisted the Soviet revolution, collaborated with the Nazi German invasion, and encouraged by the US & NATO exhibited their fascist tendencies during the color revolution in the Ukraine in the post-Soviet era.

Putin’s claim that his military action is designed to demilitarize Ukraine is double-speak, especially because Ukraine is one of the few countries in the world which had nuclear weapons to have given them up after it became an independent country.

Putin’s claims of de-nazification are also somewhat hollow given the existence of nazi elements within the separatist forces in the Donbass and in Russia itself, notwithstanding the nazis who participated in the bloody Maidan insurrection that overthrew a pro-Russian president, or the incorporation of the nazi Azov Brigade into the Ukrainian military. (Ukraine was the only country beisdes the US to oppose a UN condemnation of the glorification of nazism.)  Putin’s claims are belied by his own long flirtation with white nationalists in the “West,” backed by the oligarchs who fattened themselves by stealing the social wealth created in the Soviet Union and aided by rightist elements in Russia including the former communists. Some left elements in the US joined in Russian conferences that included such neo-fascist elements, apparently in the belief that there was something “progressive” or anti-imperialist in Putin’s opposition to the US and NATO. But there is no aspect of socialism in the economic, social or political order in Putin’s Russia (unlike China, where socialist remnants remain, and a rich internal Marxist critique of their own society still persists.) Thousands of Russians protested Putin’s military attack, and reportedly 1700 were arrested. 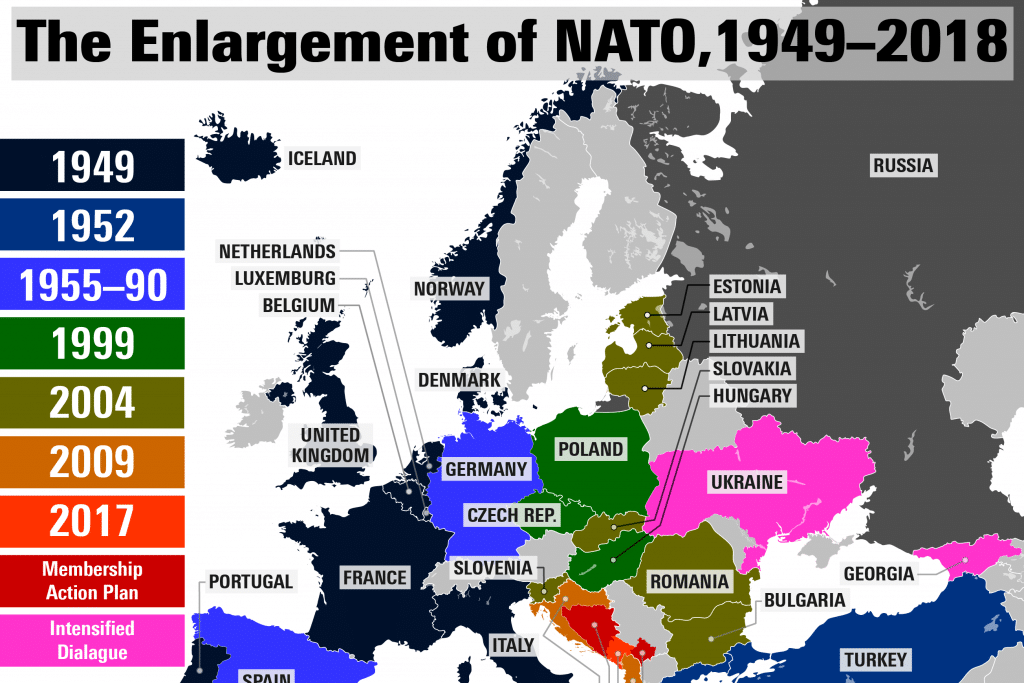 However, it is also true that NATO should have been dissolved at the same time as the Warsaw Pact was dissolved. Instead, it has expanded to Russia’s doorstep. Where was the world’s outrage when NATO invaded and bombed Libya? Where is the outrage at the US or Israeli bombing in Syria, or the US-backed Saudi attacks on Yemen?

NATO, under US domination, has pursued an aggressive, militarized strategy since the demise of the Soviet Union, not only in Europe but in Afghanistan, Libya and elsewhere. Its continued existence is a threat to peace all around the world.

A promise not to expand NATO eastward has obviously been as worthless and false as other promises made and treaties signed by the US Empire. And it is also true that the peace movements in the US or any of the Western European nations have done little or nothing, certainly nothing effective, to stop it. There were mass rallies for demobilization after World War II, mass resistance to the US war on Vietnam, Cambodia and Laos (and later in Central America), a brief period of demands for disarmament during the anti-nuclear movement in the 1970s and early 1980s. But nothing comparable or impactful has emerged since the futile opposition to the second Bush’s second war on Iraq. So, some responsibility for the current situation rests with us.

The peace movement did not stop Bush in Afghanistan, Iraq, or Syria, or Obama in Libya. There was a demonstration here in L.A. the other day, mainly Ukrainian-Americans, opposing the Russian attacks. But our capacity to affect anything Russia might do lies primarily in our capacity to control our own warmongering governments. The Democratic Party swiftly reached bipartisan unity with the GOP on spending essentially $1 trillion dollars this year on the overt and covert US military, while being incapable of authorizing $2 trillion OVER TEN YEARS for social welfare programs. Here in the belly of the beast, the Democrats are generally to the right of most of the European right-wing parties, and yet much of the so-called “left” in the US situates itself within it.

The prospects for left or peace movement efficacy do not look good. The Greens in Germany, and the Pirate Party in the Czech Republic, have basically been absorbed into the national security state apparatus with their role in government. The French left is almost non-existent in their current election contest, which has become a battle among three right wing nationalist elements to see who will face the “centrist”, technocratic Macron (who at least made a feeble attempt at independent diplomatic initiatives with Russia) in the run-off. Der Linke in Germany, an attempt to create a significant electoral left beyond the now-ruling Social Democrats has shrunk to irrelevance. These failures to reign in NATO in any significant way helped create the current situation.

There is an on-line petition and a call for a week of action March 1-7 calling for no war on Russia over Ukraine, and no sanctions. See: https://popularresistance.org/marchinternationalactions/

There is some prospect of at least unifying the splintered and sectarian forces of the peace movement around this campaign, with sign-ons from Alliance for Global Justice, ANSWER Coalition, CODEPINK, Global Network Against Weapons and Nuclear Power in Space, International Action Center, Popular Resistance, Roots Action, United National Antiwar Coalition, US Peace Council, Women’s International League for Peace and Freedom – US Section (WILPF-US), and World BEYOND War. This is first joint action by this array of organizations since the lead-up to the Iraq war. Hopefully it reflects some soul-searching and self-criticism about sectarianism, and some examination of prior errors.

Also of note, given that the first casualty in war is truth, are the false social media posts, showing explosions in other countries at other times that purport to be footage of the Russian actions. Look at these fact-checks by Agence-France-Presse and USA Today:

Not Russian strikes on Ukraine: https://factcheck.afp.com/doc.afp.com.323W3V8

The falsity of these particular social media posts, however, does not deny or excuse the reality of the brutal and aggressive nature of Putin’s military invasion.      The left and the peace movement need to think long and hard about how to become an independent and effective force capable of having a material impact on the plans, strategies and military operations of empires and oligarchs whether in the “West” or the “East”. Sloganeering is not enough and is probably counter-productive. How do we build a radical base committed to the kind of total social, economic and political transformation required to confront and overcome war, climate disruption, pandemics, fascist organizing, and the daily indignities, oppression and exploitation of capitalism, settler colonialism, imperialism, and the racism, sexism and militarism they generate?