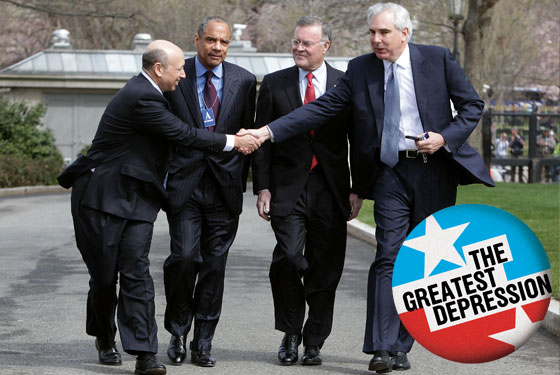 Bankers Smile as the Leave the White House

I think a lie with a purpose is wan iv the’ worst kind an’ the mos’ profitable.

There was something refreshing about Bernie Madoff.  He robbed Peters to pay Pauls and it worked well until there were more Pauls than Peters. It was straightforward and simple.  And that is the difference between him and Barclays, JPMorgan Chase, Goldman Sachs and the many other large financial institutions that cheat those with whom they deal. Bernie was not subtle.  No Congressional hearings or hearings in the British parliament were required in order to understand what happened.

A man named Diamond runs Barclays and a man named Dimon runs JPMorgan Chase. The similarity in names is not all they have in common. Each man has presided over an institution that has dealt less than fairly, in the case of JPMorgan, with its customers,  and in the case of Barclays, with consumers everywhere.  JPMorgan did it by ripping off its customers and Barclays did it by manipulating the LIBOR rate.  (It is now reported that four other major European banks are being investigated for similar behavior.)

Barclays manipulated the LIBOR rate from 2005-2009.  The LIBOR rate is the rate banks charge each other for inter-bank loans.    According to Ezra Klein from 2005 to 2007 Barclay’s placed bets that LIBOR rates would increase.  Barclays would then report artificially high rates to the authority gathering the rates from the banks to establish the LIBOR rate thus improving the chance that the LIBOR rate would go up and the bets the firm made would pay off.    Investors on the other side of the bet were losers and borrowers whose interest rates on loans were set to LIBOR were paying artificially high rates. Beginning in 2008 when the solvency of financial institutions was being questioned, instead of reporting artificially high rates Barclays reported artificially low rates leading regulators to believe the bank was healthier than it was thus reducing the likelihood that its stability would be questioned.  (When rates were low consumers benefitted since mortgages, credit card loans and other financial transactions are tied to those rates.)   When the LIBOR manipulation came to light, Mr. Diamond sent a memo to staff saying he was “disappointed because many of these things happened on my watch.”  On July 2 he said that although disappointed he would not resign his position.  On July 3 he resigned.  Chancellor of the Exchequer, George Osborne, said the episode was “evidence of systematic greed at the expense of financial integrity and stability” and said the bank was in flagrant breach of its duty “to observe proper standards of market conduct. . . .”  Any reader who tries to understand my attempt to describe the LIBOR manipulation and its effects will certainly appreciate the simplicity of Mr. Madoff’s scheme.

JPMorgan Chase is one of the largest mutual fund managers in the country.  In addition to selling its own funds, it is in a position to sell other funds to its customers.  According to a story in the New York Times its sales personnel were encouraged to sell customers its proprietary funds rather than those of competitors, even when the competitors’ funds had historically performed better than the bank’s funds. One former employee said he was “selling JPMorgan funds that often had weak performance records, and  I was doing it for no other reason than to enrich the firm.  I couldn’t call myself objective.”  Some people might have been surprised at those disclosures thinking that the bank would have reformed its ways after 2011.  That was the year the bank was ordered to pay $373 million to American Century Investments because it failed to honor its agreement with American Century to promote American Century products when it acquired that firm’s retirement-plan services unit.  The arbitrators who heard the case said JPMorgan employees were rewarded for pushing JPMorgan’s own products.

Goldman Sachs is another venerable institution that benefits itself at the expense of its customers.  In March 2012 Chancellor Leo Strine of the Court of Chancery in Delaware issued a lengthy ruling in the case of in re El Paso Shareholder Litigation.   He criticized Goldman for its blatant conflict of interest when trying to acquire El Paso Corp describing it as “disturbing behavior.” Jonathan Weil who writes for Bloomberg,  made the observation about Goldman’s conduct in that transaction that  Goldman had “every incentive to maximize its own investment and fleece El Paso shareholders.”

At roughly the same time Chancellor Strine’s opinion was making the news a former Goldman employee published an op-ed piece in the New York Times in which he said, among other things, that the firm’s clients were “sidelined in the way the firm operates and thinks about making money. . . . It is purely about how we can make the most possible money off them {clients.}.”

Readers should understand that the foregoing does not purport to be a complete list of banks that have devised schemes to enrich themselves at the expense of their customers. It is only a small sampling.  As I said at the outset, the nice thing about Bernie was how straightforward his malfeasance was.   Everyone can understand it.  The banks are no more honest than he-just more artful.

Christopher Brauchli is an attorney living in Boulder, Colorado. He can be emailed at brauchli.56@post.harvard.edu.