by Chris Hedges
American Sniper lionizes the most despicable aspects of U.S. society, the gun culture, blind adoration of the military, the belief we have a right as a Christian nation to exterminate the lesser breeds, a hyper-masculinity that banishes compassion, a denial of inconvenient facts. Many, especially white Americans trapped in a stagnant economy and a dysfunctional political system, yearn for the “moral renewal” and militarized control the movie venerates.
The movie never asks the seminal question: why the people of Iraq are fighting back against us in the first place, said Mikey Weinstein, a former AF officer who worked in the Reagan White House. It made me ill with its twisted, one-sided distortions of combat ethics woven into the fabric of Chris Kyleís personal justification mantra of God-Country-Family.í It’s an odious homage to wholesale slaughter.

We get a love story too. Chris meets Taya in a bar. She drinks too much. She vomits. He’s gallant. They fall in love. Taya is shown watching TV. She yells to Chris. We hear the TV announcer: You see the first plane coming in at what looks like the east side. Chris and Taya watch in horror. Ominous music fills the soundtrack. The evildoers have asked for it. Kyle will go to Iraq to extract vengeance, in a country that had nothing to do with 9/11. Muslims are Muslims. Muslims are evildoers or, as Kyle calls them, savages. Evil doers have to be eradicated.

The book is even more disturbing than the film. In the film Kyle is a reluctant warrior. In his book he relishes killing and war. He’s consumed by hatred of all Iraqis, intoxicated by violence. He’s credited with 160 confirmed kills, but he notes that ìif I shot someone and he managed to crawl where we couldn’t see him before he bled out, he didn’t count.

Kyle insisted that everyone he shot deserved to die. Kyle could cling to childish myth rather than examine his contribution to the war crimes we carried out in Iraq. He justified his killing with sentimentality about his family, his faith, his fellow SEALs and his nation. But sentimentality is not love. It’s about self-pity and self-adulation.
The real Kyle was shot dead at a shooting range near Dallas along with a friend. A former Marine suffering from severe PTSD allegedly killed the two and stole Kyle’s pickup.

The culture of war glorified in the film banishes the capacity for pity. It idealizes only the warrior, elevates cruelty and killing to a virtue. This culture, once it infects society, destroys all that makes democracy possible. Dissent becomes treason. Opponents are godless and subhuman. American Sniper caters to a deep sickness in our society. It holds up the dangerous belief we can recover our lost glory by embracing an American fascism.

Chris Kyle’s passive-aggressive insanity is portrayed by Bradley Cooper as depth, inner conflict, passion.Since Cooper is a good actor and a great kisser, it makes you want to make out with him instead of running in the opposite direction.
This NOT an anti-war picture; it makes anyone who doesn’t own a TAC-338 sniper rifle feel like a sissy. But what do we expect from Clint Eastwood? He’s a right wing zealot who knows how to put together a film and make it look even-handed. Something for everybody sells tickets, and the response lets you know how expert he is at that.
The mystery is, why is it #1 at the box office? Why does unbridled anger so attract Americans? Who are we really angry at? Is it the people we elect to represent us who instead represent the rich and powerful?

When you remember campaigning for candidates who share your convictions, when you believed their promises … and then they’re elected and you never hear about that agenda again, does it gall you?

You spend years watching them withdraw the social safety net our taxes pay for, develop drones to make killing more efficient and widespread. With drones and hundreds of bombing missions a week, we’re reaching the point where a single sniper will be nostalgia. We’ll be saying “Ah the good old days when we did our killing by hand. It was much neater then.”

In his State Of The Union address Obama bragged about the improving economy, but didn’t mention where the new jobs are coming from. The defense buildup perhaps? The growth spurt of drones? We’re dropping these electronic killers with regularity on Iraq, Syria, Somalia, Yemen, Afghanistan and not one word was said. Instead he offered his new bag of goodies. Free community colleges, raising the minimum wage, saving Social Security and Medicare, giving immigrants a fair shake.

For Boehner the first half of the speech was the all-smirk section. But he got to his feet and applauded when the President talked about fighting ISIS. Apparently they both think we can kill our way out of the rise of terrorist gangs. No matter that the more troops we send in, the more the rebels multiply. Richard Engel, MSNBC war correspondent, said we’ve been killing a thousand members of ISIS a month. But they’re replaced by 1500.
The more missions we send, the more young people flood into these rebel groups. They have nothing to lose including their lives, which they feel they’ll lose anyway if they don’t fight back. Like Chris Kyle, all they can see is a world that’s hostile to them and they’re not going to let that world win.

Lila Garrett is the host of Connect the Dots which airs on KPFK. 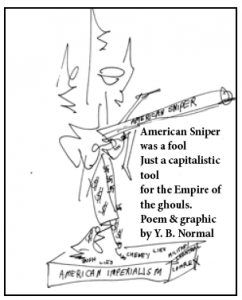 If you enjoyed this post, please consider leaving a comment or subscribing to the RSS feed to have future articles delivered to your feed reader.
By Change-Links|2015-03-02T03:55:36-05:00March 2nd, 2015|Chris Hedges, Film Reviews, Lila Garrett|0 Comments