A “Mad Dog” Against Venezuela

A Mad Dog Against Venezuela

A “mad dog” roams Latin America, James Mattis, US Secretary of Defense. “Mad Dog” is the nickname former General Mattis earned in Afghanistan and Iraq. They would like once again to imposed US domination on Latin America, relying on the support of governments that are as subordinate as they are discredited, ready to conveniently modernize the “backyard”.

That’s why Mattis traveled to Brazil, Argentina, Chile and ended in Colombia. In the center, the military management of the so called “security” and “war on drug trafficking” policies, a scheme that the south-south integration process, established by the progressive governments around the Cuba-Venezuela axis, had tried to undermine. 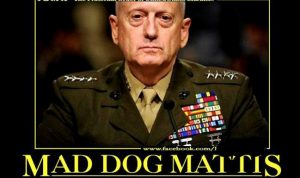 With the return of the right to power in Brazil and Argentina, the US plans to re-edit its Monroe Doctrine, this time based on “humanitarian” intervention to prevent “catastrophes”. Last year, with this excuse, the US held joint military exercises in the Brazilian Amazon jungle, called Amazonlog.

In an area where there is a triple border between Colombia, Peru and Brazil, 700 km from Venezuela, maneuvers took place involving the armies of 16 countries, under the orders of U.S. strategists. In one year, several exercises were carried out, even faster after the change of direction in Ecuador with the arrival of Lenin Moreno.

For Argentina, Mattis’ visit was the first since Donald Rumsfeld 13 years ago. On the agenda, the installation of new US military bases and the return to a limited sovereignty after Kirchnerism, as “vulture funds” have again indebted Argentines for generations.

For Brazil, he met with coup plotter Michel Temer, who is trying at all costs to prevent Lula’s return to the presidency. Along with Russia, India, China and South Africa, Brazil is a member of the BRICS. This was not lost on Mattis who  warned the Brazilian government of the dangers of becoming involved in too close a relationship with China. Mattis praised the attitude of the Temer government toward the “oppressive regime” of Venezuelan President Nicolás Maduro.

For the “mad dog”, the economic and military siege against the Bolivarian government was one of the dominant themes of the trip. The objective is also to consolidate the Lima Group, which acts in concert with Luis Almagro’s OAS to promote subversion in Venezuela. Right-wing deputies who, like Julio Borges or Antonio Ledezma, have fled Venezuela to demand armed intervention against their own country, have received the support of Almagro. Borges was implicated by a young member of his party, Juan Requesens, who is accused of having encouraged the entry of the assassins who were to kill Maduro and massacre Chavistas with explosive drones. An organized attack plan from Miami and Bogotá, came from a Colombia now ruled by Alvaro Uribe’s lap dog, Ivan Duque, ready to genuflect in front of the big dog.

Being paid by the US means receiving a steady flow of money, laundered through foundations and non-governmental organizations linked to the National Endowment for Democracy (NED) and USAID.  Despite Trump’s barking about cutting foreign “aid”, the Miami hawks got an increase in money for “democracy promotion” in Cuba, Venezuela and Nicaragua. The equally mad senator Marco Rubio obtained approval for $20 million to finance subversion in Venezuela and 15 million dollars to renew the anti-Cuba campaign, although the State Department would prefer to pay only 9 and 10 million dollars respectively. Another $29 million has also been added to forage the media, such as the discredited Radio Martí, that broadcasts U.S. propaganda against Cuba.

To help “civil society” in Nicaragua, $5 million has been allocated, to be added to the budget of the CIA-led organizations, including $125,000 for Human Rights Watch and $119,000 to “promote citizen participation in local responsibilities”.

Money that, in Bogotá, also serves to finance the grotesque Supreme Court of Justice “in exile”, led by former Attorney General Luisa Ortega, a former Chavista wanted for corruption and now a friend of Uribe. A costly staging that has “sentenced” Nicolás Maduro to more than 18 years in prison and several million fines for alleged corruption with the Brazilian company Odebrecht. The aim of the judges wanted by Interpol is to refer Maduro to the International Criminal Court for “human rights violations”. 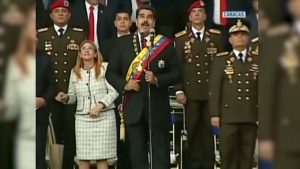 Behind the assassination attempt in Venezuela [Excerpts]

An attempt was made on Aug. 5 to assassinate Venezuelan Pres. Nicolás Maduro. While Maduro was speaking at an open-air ceremony to commemorate the national guard, two drones suddenly appeared near the speakers’ platform. A loud bang was heard as one of them exploded, injuring seven soldiers. Venezuelan officials reported that the other drone spun out of control and crashed into the side of a nearby apartment building.

In an interview on state television the next day Néstor Reverol, the interior justice and peace minister, reported that the remote-controlled drones had each carried about two pounds of C-4 plastic explosives. He said the attempted assassination of the president was foiled, in part, by equipment designed to jam radio signals. Six people were reported detained in connection with the attack, and at least two have been formally charged. [Maduro has asked for FBI assistance in investigating the attack, as some signals involved were traced to Miami.–Ed.]

In March, after US sanctions cut access to dollars, the Venezuelan government launched the Petro, a crypto-currency based in shares of its vast reserves of oil. The Petro sparked international financial interest, and initial sales of the currency were reportedly worth US$3.8 billion. In response, US authorities barred US citizens and firms from trading in Petros and, along with its allies, implemented other sanctions. Venezuela accused international financial institutions of holding up the release of its state funds—money that had been earmarked for food and medicine. As Maduro said, “The US government is chasing every last dollar that we have in the world.”

Maduro won a second term as president May 20, receiving 68% of the vote in an election declared modern, transparent and fair by all outside observers.

Noam Chomsky is a leading left intellectual and should be acclaimed for his contributions. His incisive warning about the US nuclear policy is just one example. Nevertheless, he is also indicative of a tendency in the US left to accept too readily the talking points of imperialist propaganda, regarding the present-day Sandinistas in Nicaragua.

Chomsky echoes the talking points of USAID administrator Mark Green about Ortega’s supposedly brutal regime, but he can’t quite bring himself to accept responsibility for regime change. Chomsky despairs, it’s hard to see a simple way out at this point.

Chomsky is concerned about corruption, repression, and autocracy in Nicaragua, urging the elected president to step down and run for re-election. Chomsky chastised leftists who did not absolutely support Hillary Clinton. It is from this moral ground that the professor looks down on Nicaragua.

These charges are addressed by long-time solidarity activist Chuck Kaufman:

+ The World Bank, IMF, and EU countries have certified Nicaragua for its effective use of international loans and grants; funds were spent for the purposes they were given, not siphoned off into corruption.

+ Kaufman asks, why a police force that in 39 years had not repressed the Nicaraguan people would suddenly go berserk, while videos clearly show the violence of the more militant opposition.

+ Ortega won in 2006 with a 38% plurality, in 2011 with 63%, and 72.5% in 2016. The Organization of American States officially accompanied and certified the vote. Kaufman notes, Dictators don’t win fair elections by growing margins.

Those who call for Ortega’s removal need to accept responsibility for what comes after. Here the lesson of Libya is instructive, where the replacement of, in Chomsky’s words, “the brutal tyrant and cruel dictator Qaddafi” resulted in a far worse situation for the Libyan people.

Any replacement of Ortega would be more neoliberal, oppressive, and authoritarian. When the Nicaraguan people, held hostage to the US-backed Contra war, voted Ortega out of office in 1990, the incoming US-backed Violeta Chamorro government brought neoliberal structural adjustment and a moribund economy.

If you enjoyed this post, please consider leaving a comment or subscribing to the RSS feed to have future articles delivered to your feed reader.
By Change-Links|2018-09-02T00:15:28-05:00September 2nd, 2018|Uncategorized|0 Comments