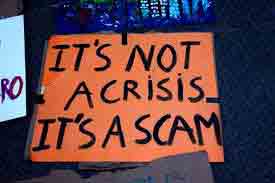 For over three months the Occupy Movement has taken hold of national and worldwide discussions. Inspired by the revolts during Arab Spring, people started to clamor for a real democracy and took to the streets in the US.

Egypt had elections and parliament, but also had a dictator and “emergency laws.” The US is, in name, a democracy, yet its growing corporate class has more money than God, and controls most “democratic” institutions, from out- right bribery to funding campaigns.

Almost half the US population is now below poverty levels. Over 1.5 million children are homeless. Students face $200,000 debt, or more, in a shrinking job economy. These loans acquire obscene interest when they can’t find jobs. This is fraud perpetrated by the banks.

On Sixty Minutes when Obama was asked why isn’t the Justice Department precuting the banks and Wall Street firms for the crimes, he said, “well they didn’t actually break any laws”.  In two days Occupy people issued paper listing scores of laws and regulations they violated for which they could be brought to Justice, verify by legal scholars.

I went to City Hall a number of times. During the weekdays there were about 100 people milling around. For the main rallies there were several hundreds. At first the City approved. The few tents multiplied until three sides of City Hall were covered with them. It was a bit unkempt but not bad. They had water and on weekends food, some very tasty. Most occupiers seemed to be in their twenties, but all ages were represented.

We handed out Change Links. Most people were friendly. One guy shouted that Change Links was the best paper in the world.

Some homeless and some mentally ill people moved in. Occupy helped them, brought in various City agencies to help. But this was one of the gripes of the Mayor, who isn’t doing anything to help these people.

I went to City Hall on the last Monday afternoon, and took a stack of the new issue on the subway from Van Nuys, then accidentally left the papers on the train. I hung around for a while but left before the big crowd came for the showdown with the City and the Police.

That night, some local channels began to broadcast from City Hall. One reported that police were prohibiting news trucks inside the perimeter, and allowing only one camera in. Clearly, a showdown was coming. Later, 1,400 cops arrived. Folks on the lawn were told to leave, or they’d be arrested. Cops made arrests.

We later learned that those who had left via nearby streets were also arrested, along with some who had no involvement with Occupy. A number of people were roughed up. One activist from Occupy the Hood was beaten. Those arrested were made to kneel inside garages or buses for seven hours, hidden from public scrutiny without water, and forced to pee in their pants.

Since the arrest of about 350 Occupy members (and others) the movement has branched out to different areas. Actions now occupy the ports, banks and other financial institutions and congress members, both in local offices and Washington. A big program is developing in occupying foreclosures. Check out <https://notohousingcrime.org>.

There is evidence that the suppression of the Occupy movement was orchestrated on a national level, with the help of Homeland Security and corporate sponsors. The movement was making real inroads into exposing corporate crime and the corporations wanted that stopped. But they won’t succeed.

As mentioned in the Cockburn article, inside the Defense Authorization Act lays the provision to give the President and the Milititary the power to detain anyone, in the World and in the US, whom they deem a threat to the US, into camps where they can remain in for life.  Now maybe Obama will be circumspect but what if Gingrich is elected, he could round up the Occupy movement and put them in camps in Arizona.  A friend spent the first years of her life in one and her fathers farm was comfiscated and she is still pissed off.

The occupation of Iraq has supposedly ended (if you don’t count the thousands of mercenaries remaining). The US spent ten years and close to a trillion dollars to devastate this advanced Middle East country. Some surveys have shown war deaths to be around one million. We instigated a civil war between Sunnis and Shiites. We destroyed their infrastructure, electricity, water, basic services, historic artifacts from the dawn of civilization and a coherent society. And although the US promised to repair the damage, we never have. The war in Afghanistan continues with no end in sight, just more carnage.

If you enjoyed this post, please consider leaving a comment or subscribing to the RSS feed to have future articles delivered to your feed reader.
By John Johnson|2012-03-01T02:16:27-05:00January 1st, 2012|Calendar, Democracy, Films, Free Speech, Independent Media, Politics|0 Comments