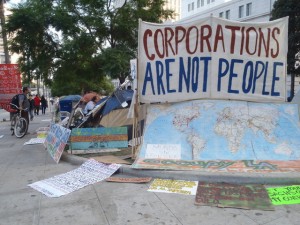 Imagine a democratic alternative to police evictions of Occupy encampments across America’s cities and towns. What if the decision to evict or not had been made by referendum? Voters could have determined whether to continue the long overdue public debates over inequality, injustice and capitalism that were launched and sustained above all by the Occupy encampments.

But that never happened in a society where private corporations own parks, lots and other possible Occupy sites. The corporate shareholders and boards of directors of those sites – a tiny minority of the population – could shut down Occupy encampments by invoking property rights. That tiny minority never wanted a national debate that questioned its disproportionate wealth and power. Private property enabled a minority with 1 percent of the wealth and income to make decisions affecting everyone regardless of what a 99 percent majority might want.

In the “public” sites chosen by occupiers, much the same happens. There, tiny numbers of politicians decide to evict, and usually for the same reasons. In New York City, for example, the billionaire mayor who bought his way into politics and power boasted publicly about “his” authority to evict occupiers from Zuccotti Park. In most cases, local politicians, dependent on donations from corporations and the 1 percent and on mass media owned by them, make the same decisions. No surprise there.

Public opinion polls consistently showed majorities of Americans in sympathy with the Occupy Wall Street movement and its basic goals of correcting the inequalities of wealth, income and power in our society. Yet capitalism’s distribution of wealth empowered the 1 percent to overrule those majorities.

The solution for this denial of democracy is to Occupy the Corporation. In one important sense, the workers inside every corporation already occupy it. They are the majority inside every corporation, while the board of directors comprises one small minority and the major shareholders another. If the workers occupied the corporation in the different sense of democratizing it, they would transform corporate capitalist enterprises into democratic, workers’ self-directed enterprises. Then the workers as a whole – a workplace community – would democratically make all the decisions now reserved for corporate boards of directors and their major shareholders. The self-directed workers would then decide what, how and where to produce and what to do with the profits. And they would collaborate with the residential communities that interact with them to build a society far more genuinely democratic than anything that now exists. Such worker self-directed enterprises would have considered, and likely arranged, a democratic decision about Occupy movement encampments.

If corporations became worker self-directed enterprises, many other decisions would likewise be made very differently from how they are made today. For example, workers would not likely overpay a few of their fellow self-directors at the expense of all the others. That would sharply reduce today’s personal wealth inequalities, which corrupt our politics. Likewise, worker self-directors would not have stopped raising real wages in the United States after the 1970s while productivity kept rising. That made sense for capitalist boards of directors to enrich themselves and their shareholders, but it would not have made sense for worker self-directors. Had real wages risen steadily after the 1970s (as they had for the previous century), there would have been no need for the vast growth in workers’ debts since the 1970s. That would not have been good news for private megabanks issuing credit cards and mortgages, but it would have better served the interests of a working class now mired in unsustainable debt. Occupy the Corporation is also a solution for the economic crisis now devastating this country and the globe, making “middle-class disappearance” a common term and generating mounting political and social conflict.

Capitalism’s current crisis needs to be treated differently from the last one, the Great Depression of the 1930s. Then, reforms and regulations (including heavy taxation of corporations and the rich) were the preferred cure. Millions of Americans took to the streets and union halls in successful campaigns to change President Roosevelt’s policies and win a New Deal of reforms and regulations, overcoming corporate resistance. But in the last half-century, corporations’ boards of directors and major shareholders used the profits gathered into their hands – and the power those profits buy – to undo the New Deal. The liberals and left wing of the Democratic Party proved unable or unwilling to prevent corporations from achieving that goal.

If we had occupied the corporations decades ago – reorganizing them as cooperatives directed democratically by their workers – they would not have undone the reforms and regulations that so many people worked so hard to put into place in the 1930s. The lesson of the undoing of the New Deal is this: We cannot respond to this latest capitalist crash with another set of reforms and regulations that leave the organization of enterprises unchanged. If we do, we will have ourselves to blame as we watch corporate boards of directors and major shareholders undo them yet again. Only this time, it well happen faster, because they have had so much practice since the 1930s. The lesson of America’s painful struggles with capitalism’s instability is this: Occupy the corporations and democratize them.