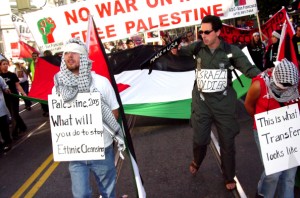 Depending on which part of the world you occupy, the United Nations is either a well-meaning but inept political body, or a place where humanitarian ideals go to die. Either way, this week’s General Assembly gathering has revealed that the U.N.’s founding principles often ring hollow in the cavernous hall where officials convene to talk about the world’s problems—and do as little as possible to fix them. Still, this year could be a pivot point for one of the most intractable conflicts on the world stage. Palestinian President Mahmoud Abbas (left) is greeted by U.N. Secretary-General Ban Ki-moon in New York City on Sept. 19, in advance of this week’s meeting. (Photo: Mario Tama/Getty Images)

In an unprecedented political gambit, the Palestinian Authority has sought full United Nations recognition and membership as a state. The Palestinians are, essentially, trying to use the same mechanism that established Israel back in 1947. Their own statehood bid, which could have not only symbolic but also legal implications for Palestine’s international standing, has support in the majority of the General Assembly.

It is nonetheless dead on arrival, since the U.S., as a member of the Security Council, has vowed to veto the measure if it comes up for a vote. The Obama administration is reportedly working frantically to convince Palestinian President Mahmoud Abbas not to go through with plans to formally submit the request after his speech today. Israel has warned (with both diplomatic and military threats) that approving the bid would fatally disrupt the already moribund “peace process.”

However things unfold from here, the Palestinian Authority has set in motion a diplomatic frenzy that has at least momentarily reinvigorated the debate over their basic right to live free of occupation. On balance, critical observers say the statehood push is a calculated exercise in blind hope. Middle East chronicler Robert Fisk offered a pessimistic assessment, but acknowledged that the campaign to concretize Palestine’s “fantasy state” could fundamentally alter the political landscape:

This vote at the UN—General Assembly or Security Council, in one sense it hardly matters—is going to divide the West—Americans from Europeans and scores of other nations—and it is going to divide the Arabs from the Americans. It is going to crack open the divisions in the European Union; between eastern and western Europeans, between Germany and France (the former supporting Israel for all the usual historical reasons, the latter sickened by the suffering of the Palestinians) and, of course, between Israel and the EU.

Fisk argues that though the statehood campaign may be doomed, the silver lining will be the exposure of the hypocrisy of the U.S.-Israel alliance, despite President Obama’s claims of restoring the international image of the U.S.:

In the new Middle East, amid the Arab Awakening and the revolt of free peoples for dignity and freedom, this UN vote—passed in the General Assembly, vetoed by America if it goes to the Security Council—constitutes a kind of hinge; not just a page turning, but the failure of empire.

But the statehood application at issue isn’t just a matter of Palestine versus empire. Plenty of Palestinians, in fact, don’t want the fate of their nation decided by a political class that they feel doesn’t speak for them. Many activists fear it will only buttress existing imperialist structures and enable the Palestinian Authority, whose legitimacy as a ruling body has been questioned, to consolidate its power and undercut grassroots resistance movements.

The activist coalition U.S. Palestinian Community Network, which recently rallied at the U.N. against the statehood bid, argues in a statement of opposition:

this initiative in no way protects nor advances our inalienable, and internationally recognized, rights—fundamental of which are our right to return to the homes and properties from which we were forcibly expelled, our right to self-determination, and our right to resist the settler colonial regime that has occupied our land for more than 63 years. The Palestinian people, wherever they are, hold these rights. They are non-negotiable. No one can barter them away for false promises of “peace” and “stability.”

Reports from the front lines of the occupation reveal deep ambivalence toward the issue, steeped in fear that the plans for statehood status would marginalize many ordinary Palestinians’ aspirations for true independence and sovereignty.

Sami Abu Zuhrim, spokesperson for Hamas in Gaza (rival to Abbas’s Fatah party) told Electronic Intifada that the initiative could undercut Palestinians’ right to return, arguing, “I do not believe that the Palestinian people want a seat at the U.N., but rather they want freedom and self-determination on their own land.”

The same report quoted Iman Qaddada, a university student from Gaza City: “Will a UN recognition of a Palestinian state on 1967 border lines allow us to take care of our Palestinian brothers and sisters in neighboring Arab countries like Jordan and Syria?”

Reflecting the sharp divisions pervading both the land of Palestine as well as its politics, blogger Rana Baker drew an analogy with an apartheid-era political trope:

The state they want me to embrace is one disconnected and disjointed by a racist wall. A state on less than 22% of historic Palestine through which illegal settlements snake and swallow up water and other natural resources. Something that one can call a bantustan. Indeed, something I, we, the majority of Palestinians, cannot afford.

At Al Jazeera, political scholar Joseph Massad predicts that whatever the outcome of the statehood bid, Israel and the Palestinian political elite both stand to gain. The effort wouldn’t resolve issues of borders and human rights violations, nor would it resolve a key legal problem—which is not a lack of international recognition, per se, but the political barriers the U.S. deploys to stonewall legitimate efforts by Palestinians to raise grievances through international law:

The unending “peace process” will continue with more stringent conditions and an angry US, upset at the PA challenge, will go back to exactly where the PA is today, if not to a weaker position. President Obama and future US administrations will continue to push for PA and Arab recognition of Israel as a “Jewish state” that has the right to discriminate by law against non-Jews in exchange for an ever-deferred recognition of a Palestinian Bantustan as an “economically viable” Palestinian state—a place where Palestinian neoliberal businessmen can make profits off international aid and investment. Either outcome will keep the Palestinian people colonised, discriminated against, oppressed, and exiled. This entire brouhaha over the UN vote is ultimately about which of the two scenarios is better for Israeli interests. The Palestinian people and their interests are not even part of this equation.

Keep in mind that all this gamesmanship is taking place at the United Nations, the institution that was supposed to stand apart from from ugly geopolitical conflicts and compel nations to face common humanitarian challenges together. It’s doubly ironic that as the General Assembly gets entangled in the Israeli-Palestinian conflict, the world is barely noticing that some groups have gathered at the U.N. to try to rekindle that original vision—at a meeting of the Durban Declaration and Programme of Action, a decade-old initiative “to eliminate all forms of racism, racial discrimination, xenophobia and related intolerance.” (More irony: Israeli groups have also denounced the Durban process as anti-semitic because it has opened a channel for debating Palestinian self-determination.)

The voices behind the Durban Declaration, representing the displaced and disenfranchised, shouldn’t expect to get a full and fair hearing before a political body that sounds increasingly like an echo chamber for superpowers. Whether they’re in New York or Palestine, the unheard again find themselves shouting at the wall; they might as well take it back to the streets

If you enjoyed this post, please consider leaving a comment or subscribing to the RSS feed to have future articles delivered to your feed reader.
By John Johnson|2011-10-01T22:00:59-05:00October 1st, 2011|Commentary, Human Rights, Peace and War|0 Comments