Thanks to https://ballotpedia.org for the following research. You may donate at their website for their detailed and timely coverage of the national elections on Nov. 4, 2014.

The 2014 general election resulted in sweeping gains for Republicans at the federal and state levels, up and down the ballot. Republicans took control of the US Senate while broadening their existing majority in the House of Representatives. There will be more Republican governors than at any point in the past 20 years, while 11 state legislative chambers flipped over to Republican control. Republicans now have more than three times as many states as the Democrats where they control both houses and the governorship. Statewide and local ballot measure results were mixed, with both liberal and conservative sides experiencing successes and failures on a variety of issues.

For a complete directory of the comprehensive coverage that Ballotpedia and Judgepedia offer, visit: https://ballotpedia.org/Links_to_all_election_results,_2014

Here in California, Democrats won all the partisan statewide offices, and almost all Congressional and legislative races offered a choice between only two candidates, from the Republican and Democratic parties (or two members of the same party). There were six measures on the ballot for voter approval, of which three passed and three were defeated. 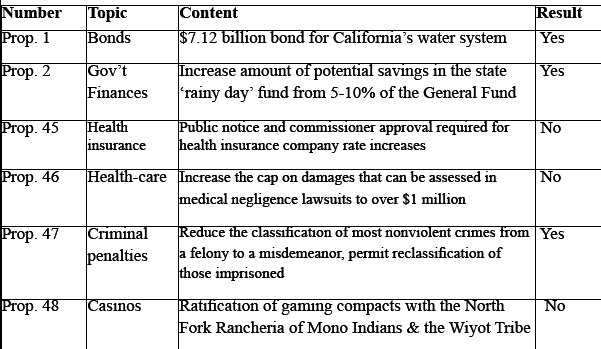 According to ballotpedia.org, what were the “big questions” in the November election around the country? Who ended up with majority control of the U.S. Senate?  The Republicans. The Louisiana Senate seat will be decided in a run-off. Did the Democratic Party reduce the Republican House majority? No, they lost seats. Who controls state governments? Republicans picked up additional governors and legislatures. How many state legislative chambers changed hands? Eleven flipped to the GOP. What happened to the governors elected in the 2010 Tea Party wave? Republicans re-elected in MI, WI and FL. What statewide ballot measures were approved? All measures to raise the minimum wage passed. What happened to state supreme courts and the balance of power? Most incumbent judges were retained. CA Supreme Court justices were ratified despite a “Vote No” campaign.

Referencing the article I submitted for Change-Links in Oct. on the issue of “How Significant is the Ever-decreasing Low Voter Turn-out in the US,” it’s clear why… A two electoral “choice” reveals the stark reality of a political dictatorship. That explains why the turnout was the lowest in 72 years, since World War II, when millions of soldiers couldn’t cast ballots. When a two (One) party system controls everything why bother to vote? Why on;y A or B? What about C through Z? It’s the lack of choice, “stupid!” Until this understanding enters into the national political dialogue, nothing will change, just get worse, for all working folk in this very difficult landscape. Moreover, the nationwide historic purging of voters initiated by Republicans would not have existed if many electoral entities (parties) could participate in the national elections.

To further expand your understanding of this issue, listen to a recent interview with Michael Glenen, former Congressional consultant, who worked for then-Sen. Frank Church, who presided over the 1964 US Senate Select Committee to Study Governmental Operations with Respect to Illegal Intelligence Activities, which exposed illegalities by the FBI, CIA and other agencies. This interview was aired on Pacifica Radio KPFA and KPFK by host Mitch Jeserich of “Letters & Politics.” It is archived at  https://archives.kpfa.org/data/20141104-Tue1000.mp3 The issue of “double government” in the US is discussed in painful detail. Who is really in control, why does the people’s vote not count during selection of nationwide public officials at any level?  That this so-called ‘democracy’ is only an illusion to fool “We The People!”

If you enjoyed this post, please consider leaving a comment or subscribing to the RSS feed to have future articles delivered to your feed reader.
By Change-Links|2014-12-01T22:43:39-05:00December 1st, 2014|Bella De Soto, California, News, Politics|0 Comments