On Saturday, July 8, more than 100 people, with some from the 63rd Assembly District of California Assembly Speaker Anthony Rendon, held what the California Nurses Association characterized as a “Town Hall… on Single Payer,” in the Mayfair Activities Room in Mayfair Park, 5720 Clark Ave., Lakewood, California, also in the Assembly Speaker’s district.

The first speaker of the town hall was Marcia Martin.  Martin, who was identified as an environmental and racial justice activist, said, “I am a constituent.  I was born and raised and currently live in the city of Bell, which is in the district…My community lies within an area contaminated by Exide Technology.  It was a battery-recycling plant in the city of Vernon that operated for nearly 100 years…It spewed lead, arsenic, chromium-6, cadmium, benzene … and other carcinogens and toxics into the atmosphere.  We breathed it in.  It contaminated our soil and consequently has contaminated our ground water.” 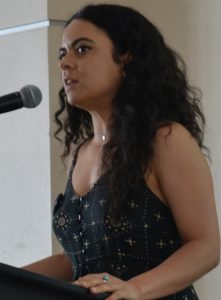 speaking at the Town Hall on Single Payer on the contamination by Exide Technology; Photo by Barry Saks

After Martin, Michael Lighty, the Public Policy Director of the CNA, spoke.  He said, “I know that there is some sense out there that SB (Senate Bill) 562 is a radical idea or something from the far left…. Have you ever heard of Warren Buffett? Now does anyone think Warren Buffett’s a leftist?” Because Warren Buffett came out this week, co-chair of Berkshire Hathaway, one of the most successful investment companies in the world…and he came out for single payer….So what we are trying to do with 562 is take those principles that have succeeded in Medicare since 1965 and apply them to the rest of the health care population.”

One person in the audience before the start of the meeting was Bill Eisen, 72.  Eisen said lives in Torrance and thought healthcare should be a human right.  He said, “Our country needs to provide its citizens with affordable healthcare just like every other western country” and soon after added, “I frequently attend the Los Angeles chapter of the Healthcare for All group.”  When Eisen was asked if he were a registered Democratic, he said, “No, I’m registered (as) no party preference…I think the Democrats are totally corrupt right now.”

Another person in the audience was Jennie Vargas, 55.  Vargas, before the event started, when asked if she were from Rendon’s district, raised her hand.  Vargas said she lives in South Gate, is registered Green Party.  When asked if she was willing to protest outside Rendon’s office, she said, “I did that!”

If you enjoyed this post, please consider leaving a comment or subscribing to the RSS feed to have future articles delivered to your feed reader.
By Change-Links|2017-07-28T16:34:06-05:00July 28th, 2017|Capitalism, Economy, Environment, Events, Health, Health, Health Care, Healthcare, Justice/Injustice, Movements|0 Comments